I'm a big fan of Lovecraft's horror and in particular his Cthulhu mythos. This is a collection of short stories inspired by Lovecraft's range of cosmic horror. This isn't a collection of Cthulhu tales, there's some that are related but also some taking a wider view. I was surprised by the latter ones being more effective than the former.

They're all decent stories although some stood out more than the others. Two stories in particular impressed me. The first tells the story of a world filled with yellow dust and it was a poignant and melancholy story that is superbly written.

The other story that really stood out for me was the closing one. This was the story of cavemen under attack by minions of the elder gods. It was the unusual perspective that attracted me to this one. The fact it was well written helped too of course!

One of the reasons I enjoy this style of horror is the twists in logic and perception which gets me thinking as I read them. On that count this is a fine collection of stories and one for any Lovecraft fans or those looking for something a little different with their horror. 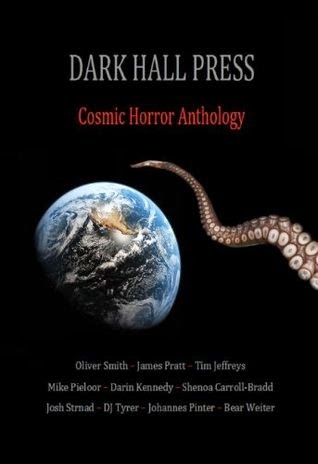 Dark Hall Press is proud to present our Cosmic Horror Anthology, ten tales of nameless terror from some of the most exciting voices in the field.

It’s all here, from stories of subtle, invasive menace to tales of full-fledged cyclopean horrors; from alien worlds to the yawning holes in perception where strange forces lurk; where nature takes on a terrifying sentience and one is not safe even in dreams.

We at Dark Hall invite you to join us in celebration of the modern weird tale, to cast off the veil of reason and see the universe for what it truly is – frightening and uncontrollable.


Click here to buy Cosmic Horror Anthology from Amazon US / Amazon UK (and it's a decent horror read)
Posted by Michael Brookes at 21:34