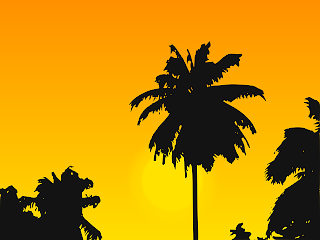 'You know, I'm really going to miss this place.'
'Why?' You've only been here a couple of hours.'
The man peered over the rim of his sunglasses, staring hard at the woman who lay on the deckchair, skin glistening with sweat and suncream as the overhead sun beat down on them.
'Are you kidding?' smiled the man. 'Look around!'
He waved his hand at the azure waters lapping the white sands, the palm trees waving in the breeze, the sound of laughter echoing out as a group of men and women chased each other along the beach.
'If you've seen one tropical island, you've seen them all,' replied the woman, rather snootily.
The man sat up 'But that's the point - nobody's going to see this place again, not for at least ten thousand years.'
The woman lounged back into her deckchair. 'Plenty more where this came from.'

Sirens blared, bells rang out, people rushed to and fro, footsteps echoing loudly along concrete corridors. The man ran down the corridor, adjusting his suit, fumbling at his pockets for his safety visor and a cigarette. The click of high heels made him look up, the woman, looking glamorous in her green uniform, flashed him ruby lips and perfect white teeth.
The man ran into the control room, a group of military men turning to face him.
'Glad you could make it, doctor,' said one man, puffing on a cigar, his uniform gleaming with stars and medals.
An assistant handed the doctor a clipboard. Ticking some boxes, he handed it back, and moved forward.
'Thirty seconds to go.' Sounded a soulless voice.
As one, the assembled men put on their safety visors and looked out of the bunker's viewing slit.
They stood still as statues as the countdown continued, then turned, shielding their eyes from a massive burst of white light. The island was no more.
Posted by Michael Brookes at 14:40