Conversations in the Abyss Opening Chapter

Conversations in the Abyss

The miracle’s fire consumed me.

How long had I been imprisoned here?

I knew it was 2011 when the Friar and his team chained me to that monastery wall, but what year was it now?

For too long the chill stone had encased my body and spirit. At first the principal torment had been the miracle. I thought stealing it was a good idea at the time. The blessing had sustained Lazarus for over twenty centuries; the thought it might do the same for me had been a beguiling one. Lazarus had been hell bent on starting the apocalypse and destroying mankind so he could be returned to Heaven. Along the way he’d made the mistake of torturing me.

That memory haunted me still. The moment that I learned that there were people in this world with talents greater than mine. Naturally I’d inflicted my revenge, stealing the curse others labelled a miracle in the process. Unfortunately the theft came with a cost. The price came in the form of the agony blazing through my wasted flesh. This blessing of eternal life didn’t appreciate being worn by another’s skin. The price started immediately weakening me while the Friar, Hammond and his soldiers imprisoned me in the walls of the monastery.

The feel of the sun upon my skin soon faded into a distant memory. Now the only connection I had to the outside world came in the form of muffled chants of the monks. Their hymns and constant
prayers seeped through the walls like damp. Their sacred words combined with the mask fixed to my face and together prevented my spirit from leaving my body.

How I missed having the ability to soar. I yearned to once again roam high above the earth. The world laid out below me as if I flew like a bird. I could do that at will once. I hadn’t used that ability enough.

Even more I missed being able to invade the minds of those I encountered. With a thought I experienced their memories as if they were my own. I could also bend their will with my own like puppets on a string.

At first the miracle and confinement were the only torments I was forced to endure. Strange as it may seem I got used to the suffering. They almost became companions. As time passed new pain entered my world. These started as mundane complaints, hunger pangs in my belly, dryness and then constriction in my throat from thirst. These mundane torments provided some diversion for my bored mind.

For a time I used my gifts to suppress these pains. Eventually the desires of the body overcame my will and along with the miracle they danced through me. They complimented each other, kept my body
wracked and my mind desolate.

Even for me depression and despair proved difficult to hold at bay. My state of mind became a serious concern. The pain simply wouldn’t end. My mind began to crumble under the relentless assault.

I needed something to distract me. Anything that I could focus my mind on, to separate myself from the twisted pains defining my reality. I sought a refuge and turned to the place that almost spelled my doom many years ago.

The abyss became my escape. On the shadowed cliffs above the veil below I found a new home. I didn’t escape the pain completely, but I could hide from it for a while. Sooner or later the pain always
dragged me back to my tormented flesh. But for periods of time I freed myself. I delved so deep within myself I reached the very edge of life.

The abyss itself remained a mystery to me. I now realised it wasn’t the portal to Hell I’d once assumed. After defeating Lazarus I’d glimpsed Hell as his soul was dragged into the pit. When I stared
down into the abyss it wasn’t the same. This was the veil between our lives and what comes next.

More than I had during my earlier life, I considered what that meant. What would come next? I couldn’t deny some afterlife existed beyond death. Not that I really had to worry about that particular fate. After all, the miracle protected me.

As well as my sanctuary, the abyss eventually turned out to be another of my tormentors. Beyond the veil I discerned vague forms moving in the shadows.

I’d first discovered the abyss in my younger days after taking acid. As it had back then the forms became agitated by my presence.

Beyond those depths was the ultimate escape. An escape denied me by the miracle. It made me immortal. Or pretty damn close to it.

There was no escape in any direction for me.

Conversations in the Abyss is on a half price sale for September only! 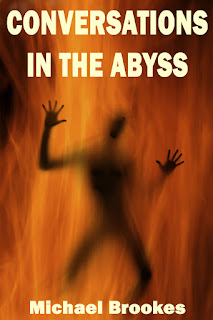