After reading and thoroughly enjoying Last and First Men I had to read this other rated classic by Olaf Stapledon and I was not disappointed.  If the scope of the first book was staggering then this book blows that away by several orders of magnitude. In this book he turns away from the history (both past and yet to come) of the human race and examines the possibilities for life on first an interstellar, then galactic and finally on a universal scale.

On scope and imagination alone this is a fascinating read, but delving deeper there are some brilliant ideas which kept me glued to the pages. Unfortunately it's not an easy read. While it does contain the character of the narrator and encounters with other individuals this isn't story that simply follows the events of the plot. This is more an exploration of ideas, although I would say that it's a little less dry than the author's earlier work.

It suffers from a few other issues. The most obvious is the gulf of understanding that has changed since this book was written. Some of the science is very outdated (as you would expect) and while it is noticeable it doesn't undermine the scope of thought the book invokes. Although I did find the repeated assertions that something was beyond human understanding a little tiresome.

Another issue for me was the last section. I'm actually in conflicted opinion about this section as it stands very different from the bulk of the book. On one hand it's an excellent modern (ish!) take on Paradise Lost (which is my favourite story of all time) while on the other the nature of the Star Maker is at odds with the more scientific leanings of the earlier chapters.

It's a difficult book to rate as I can see why people would struggle with it. However based on the ideas that it inspired in me while I was reading and the outstanding journey it took me on I would say that this easily deserves its classic status. It's one not just for science fiction fans but anyone that holds an interest in life and its place in the universe. 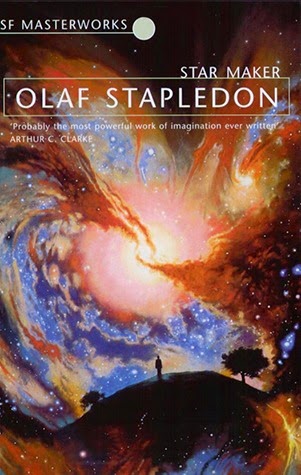 This bold exploration of the cosmos ventures into intelligent star clusters and mingles among alien races for a memorable vision of infinity. Cited as a key influence by science-fiction masters such as Doris Lessing, this classic has left its mark not only in modern literature but also in the fields of social anthropology and philosophy.

Olaf Stapledon's 1937 successor to Last and First Men offers another entrancing speculative history of the future. Its narrator, a contemporary Earthman, joins a community of explorers who travel to the farthest reaches of the universe, seeking traces of intelligence. Along the way, they encounter nautiloid water beings, races of hyperspiders and hyperfish, composite group intelligences, plantlike creatures, and other strange life forms. Their dramatic voyage unfolds against a backdrop of life-and-death struggles on a cosmic scale.

Click here to buy Star Maker from Amazon US / Amazon UK (and it's a stunning read)
Posted by Michael Brookes at 14:51