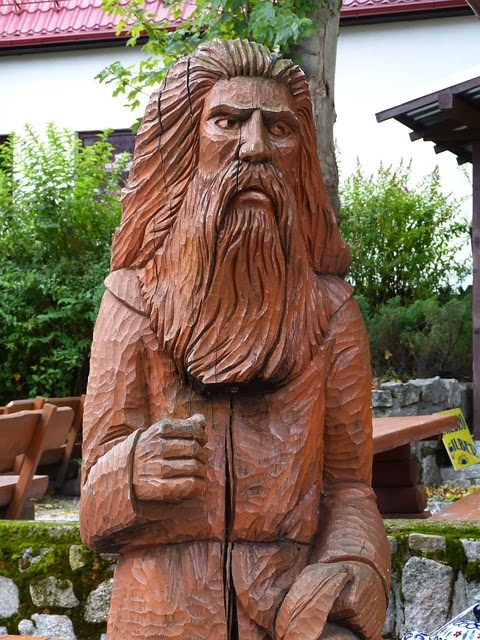 Max had paid a fortune for his detached house with a swimming pool and integrated sound system. The blinds were programmed to open at dawn and each regular visitor had a personalised doorbell sound. The gardens were kept immaculately as he was a tough employer. Each room was redecorated on an eighteen month cycle. He was modern-day lord of all that he owned but not of all that he surveyed. He could not control the view from his den.

His opposite neighbour had erected a wooden monstrosity in her front garden, near to the kerb. Max was enraged at this eyesore. He’d hired environmental lawyers to determine whether it had been carved out of endangered timber. In which case it may be impounded by the authorities– unfortunately not. The object was over thirty feet tall and seemed to have been positioned so that it faced Max’s property. He took great pride in the low-level Japanese style front garden. It was out of the question for him to plant a fast-climbing shrub or erect a front wall. The asymmetrical bonsai acacias and rare orchids nestling amongst the miniature rock formations and water features depended upon unfettered views. Max was too busy to rake his own Zen gravel driveway. He paid somebody daily to create new patterns and vicariously calm Max’s mind.

He intentionally knew none of his neighbours. He valued his privacy. However Max broke his rule and approached his neighbour when she arrived home one afternoon. He struck up a conversation about the wooden statue.

‘It’s fabulous, isn’t it? My late husband was a huge “Lord of the Rings” fan. He picked it up in Thailand. He named it “Gandalf”. We had it in storage. It was only when I moved here after he’d died that I knew I’d found just the right place for it. Glad you like it.’

Max uncharacteristically did not have the heart to tell her how much he detested it. Over the weeks he spoke to his therapist. She designed breathing and meditation exercises for him to overcome his antipathy towards it. Every morning when he spied it anew he felt anger and revulsion welling up inside. His therapist had grown accustomed to early morning calls demanding emergency appointments. She always fitted him in as he was a wealthy man.

Eventually, she suggested an unusual solution.

Everybody had heard about gnomes going missing from front gardens and then their owners, sometimes months later, receiving postcards from them from exotic locations. Max was all about taking it to the next level. He had to go one better.

Naturally, Max’s neighbour was distraught when she realised that her beloved “Gandalf” had been stolen. It even made the local news. However, a week later she received the first of many webcasts from increasingly exotic locations. It had cost Max a fortune in transportation costs and the hiring of an Ian McKellen soundalike but his neighbour gained much comfort from the heart-warming messages she regularly received from Gandalf.
Posted by Michael Brookes at 14:48