Edward Parker provides this week's Tuesday Tease with the prologue of his novel 'Clown Friday'. I read it recently and it's a fantatstic horror read. I rated it five stars and it's definitely one to read if you're afraid of clowns! 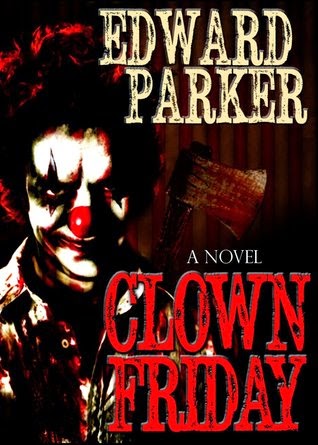 She fled through the mirror maze and the beast pursued her. The beast was huge and vicious and hungry. Its face was a painted death mask; its lips curved in a crimson grin, and on its scalp bounced spiked and crazy hair. It was dressed in an enormous clown suit.

And in its white gloved hands it held an axe that was gnarled through years of butchery and stained with ancient blood.

So, the beast close behind her, the girl ran between the mirrors, ran through the darkness, desperate for a salvation that she knew could never come.

Terror sharpened her senses. Smells assailed her: the old canvas of the pavilion in which she was imprisoned, damp grass, hot dogs, sawdust, the smell of the circus, the smell of the carnival…and the stench of the beast of course: low, feral, hideously eager, full of blood and murder.

At one point she stumbled, the damp grass betraying her, and she fell to the harsh ground. She remained that way for a moment, her head bowed, stray locks of her sweaty hair hanging into her face, expecting the beast to hover above her, expecting the killing blow, expecting the butchery to come.

But there was nothing.

No deadly blow, no searing pain. Her pursuer must have paused. She could imagine it there between the mirrors, in the darkness, grinning, enjoying her terror, drinking it up like the finest wine.

Slowly, she raised her head. She gazed at herself in a nearby mirror. Her face was pale, and her eyes were glassy and dazed. A single red runner of blood leaked from the corner of her mouth. And her hair – her raven dark hair – tied into those hateful bunches…

She stared at her own face, saw it reversed and distorted within the mirror’s world. She smelled her terror. She harkened to the silence. And then…

…Laughter, issuing from a thousand throats, whispering from beyond the pavilion’s canvas walls. They were assembled in the field beyond, the revellers, waiting for her screams, hungry for her agony. Their laughter continued, echoing between the polished surfaces of the mirrors.

That was enough to goad her into action.

Up, running, between the mirrors, through the darkness, not knowing where she was going, but knowing only that she had to flee, to be away from this terror.

She paused, disbelieving, filled with traitorous hope. Was she to be spared? The first ever to be spared? The flap of the canvass tent had been drawn back and daylight spilled through it. She paused. A trick, it had to be. But in the extremity of her desperation she did not care. She raced toward the opened flap, toward a world beyond that would be filled with daylight and rejoicing, and they would applaud her, and honour her, and crown her the Carnival Queen, and soon she would be back at home helping her mother to bake apple pie, or sitting at her grandfather’s knee listening to his old stories just as she had done since she was a little girl…

…and the axe that smashed into her face was as silver and as swift as a bolt of lightning.

She fell to the grass, bloodied, twitching. She had fallen to her side, and so could see herself in agonised, terrified death in a nearby mirror. Her pale face, cleaved in two, a bloodied gash rent between her eyes, and her eyes themselves, wide and shocked and disbelieving.

The beast appeared. It squatted behind her, and grinned skull-like into the mirror. The folds of the clown suit fell about it. She saw the red stained axe, and she saw the hands that held it, the white gloves now splattered with her blood. A beast - oh yes - an ogre out of some terrible fairy tale…but at the same time not a beast at all. Just a man. A living, sweating, grinning man, although…did not beasts and men often inhabit the self same skin?

He grinned at her in the glass.

He reached down and stroked her, his fingers playing along her dying skin.

“Time,” said the beast, “to bring these revelries to a close.”

Then all went dim and dark and quiet, and there was no more for her. No more, save for the final vision that she saw within the glass. The beast taking a knife from the folds of his clown suit, reaching down, and cutting a long strip of flesh from her naked arm. She didn’t even feel it. And then he held the strip of flesh to his lips and jammed it into his mouth, and his long teeth plunged into its crimson texture, his throat gulping as he swallowed.

Edward Parker was born in 1975, and raised in Stourport-on-Severn, Worcestershire. He graduated from Keele University in 1999, and has been employed as a farm hand, shop assistant, library assistant and fairground ride attendant. He currently works as a training administrator.

Edward Parker lives and writes in Worcestershire.
Posted by Michael Brookes at 09:24