Tuesday Tease - The Scream of Angels by David Haynes

David Haynes is one of my favourite indie authors, his collection of Victorian era horror are amongst some of the finest horror books I have read (and I've read a few!), his non-horror writing is also superb. For those of you that haven't tried his writing yet here's a little taste from The Scream of Angels.

The Scream of Angels is currently only 49p from Amazon so grab yourself a copy at this bargain price today! 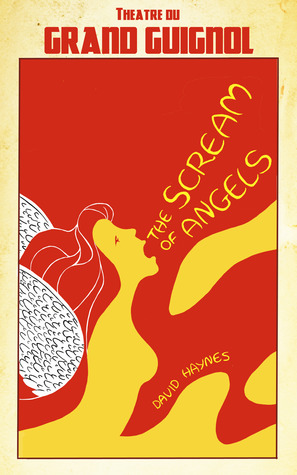 “We require a knife, preferably sharp but not necessarily so, a saw and a tourniquet. That is all.”The surgeon stood beside the table and addressed his two comrades. His frock coat was stiff with the blood of a hundred amputations and he wore it proudly, as proudly as a medal of valour.

“You hold him,” he pointed the teeth of the saw at one of his colleagues, before turning his attention to the ashen faced other, “and you can remove your pocket watch and record how long I take to remove his leg.”

The patient uttered a terrible howl as the surgeon smiled down at him. “Hush now. It will be over in a matter of excruciating seconds.” He threw his head back and laughed like a lunatic.

“Now hold him!” He placed the teeth of the saw upon the patient’s leg, just below the knee. “One, two, three, four!” In just four strokes the saw passed through skin and bone until it grated on the stone table beneath. He picked up the severed leg and hurled it dismissively into a bucket of sawdust. “Close the wound, gentlemen!”

The patient gurgled and thrashed as they sealed his flesh.

“How long did I take? It must be close to a new record.”

The assistant was frantically attempting to aid his beleaguered colleague close the gaping wound and had dropped the watch.

“I asked you how long!” The surgeon demanded.

The assistant turned his bloody face to the surgeon, “I fear you have removed the wrong leg, sir.”

“Then we must remove the other. Take up the watch and record the time. Mind you deduct ten seconds!”

And in the seats, which had once heard the tortured anguish of confession, Robert Bishop vomited onto his shoes. His friend, Blair, cheered and clapped, delighted at his the utter misery of his friend.

“Bravo!” Blair shouted as the surgeons and patient bowed before the audience. The blood of a calf they planned to eat later, dripped from the pointed teeth of the saw.

“Welcome to Paris, Bishop! You would not see this in London, would you?”

“Come, before you cover us both. Let us have supper!” Blair gripped his shoulders and pulled him out of the confessional and onto the street.

David Haynes has been making up stories since he was very young. His first story entitled, “How the Greenhouse Actually Got Smashed, Dad!” got him into trouble and went unpublished. Nevertheless, the stories continued and the desire to write them down grew stronger.

David now writes stories in the genre he loves the most – the dark, mysterious and delicious world of horror! The two main influences on his writing are Stephen King and Edgar Allan Poe who he considers masters of the shadowy world.

So far he has written a collection of sinister stories set on the dark streets of Victorian London and in the gloriously opulent Paris of the nineteenth century. Both represent his love for the history of our greatest cities and the dark deeds that were done on their shadowy streets.

One day he hopes to be able to write full-time in order to get all those stories out of his own mind and into the minds of others.

The question is – dare you read anymore?

Books by David Haynes on Amazon: