Film Review - A Fistful of Dollars

I love the Dollars trilogy and have done since I was a young lad, strangely I wasn't a big western fan, but I did like the spaghetti westerns, those with Clint Eastwood especially. It's been a while since I last watched them so I've decided to spend the day watching them again. For me this is the weakest of the trilogy, but even so is still a damn fine film.

The story is a simple one, a man with no name enters a small town on the Mexican border that is run by two different gangs. He starts playing one off against the other, principally to earn money from both sides, although he does appear to have honour buried beneath his mercenary façade. Naturally there's complications along the way and it all culminates in a dramatic shootout.

The pacing is good and the action get's going quickly, the various schemes are simple but keep the plot going. It bears all the hallmarks of a decent western (a spaghetti western in particular), there's the evil gangs (two in fact), Clint is an excellent gunslinger and so is his opponent. The music is superb and really highlights the mood.

For me its weakspot is Clint's character (and the character's generally), there's no real development, there's enough to carry the story (what there is of it), but little more.It's still a fine film to watch, but does lack some of the subtleties that made the later films such classics. 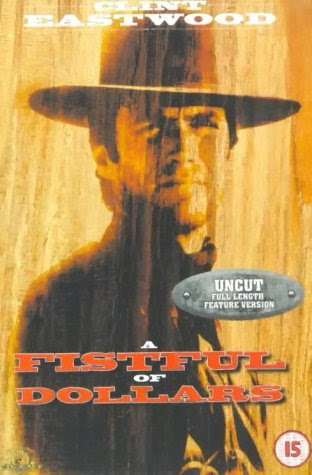 Sergio Leone's spaghetti western is a remake of the Kurosawa classic 'Yojimbo' and features Clint Eastwood in his first big-screen starring role. Laconic gunslinger the Man With No Name (Eastwood) makes a financial killing by playing two feuding families off each other in a small Southwestern town.

Posted by Michael Brookes at 12:54