The main reason for that is that the characters get developed a bit more and that it doesn't take itself too seriously meaning that it's a lot of fun to watch. If you haven't seen it (and if you haven't then you really should!) the story is about two bounty hunters with quite different methods teaming up to take down an infamous bandit and his gang who take on a huge score.

The story itself isn't really anything special, there's a few threads that get twisted and pulled to provide some variety, but for the most part the pleasure comes from watching the three leads in action. The interaction between the two hunters is superb to watch and the addition of Lee Van Cleef also adds to the quality of the film compared to the first one.

As I've already mentioned it's not as straight faced as the first film, which as well as providing  some humorous scenes (the scene where the two hunters first meet is a good example), it also provides some scenes that demonstrate some of the lighter sides of the characters - something I thought was missing from the first film.

It also has the same excellent soundtrack that supports the film and combined with it's other attributes makes this one of the finest westerns ever made. 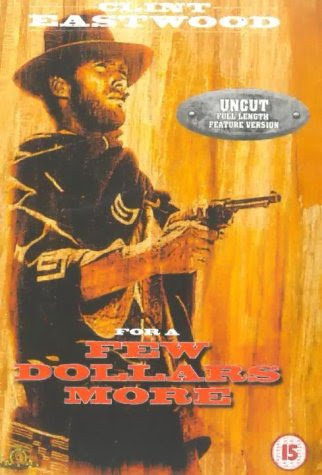 After the success of 'A Fistful of Dollars', Clint Eastwood's Man With No Name reluctantly joins forces with bounty hunter Colonel Mortimer (Lee Van Cleef) to battle psychotic bandit El Indio (Gian Maria Volonte) and his gang of outlaws. Director Sergio Leone's spaghetti western once again features Ennio Morricone's atmospheric score.
For a Few Dollars More is available from Amazon (and is a classic western)
Posted by Michael Brookes at 14:55