I enjoyed reading this, i's a dark tale about a geek (Jake Marsden) who's experiencing terrible dreams about something strange in the woods behind his house. He investigates but discovers little before the ancient evil awakes and attacks his town. With a small group of survivors he has to battle this evil to save the town.

The pacing is good, the book builds with some creepy dreams and odd occurrences while building up the characters central to the unfolding events. The mark of a good read is that you don't notice how many pages you've read and this was the case with this book. The pace increases as the book progresses and soon the attack on the town begins.

The group of friends then have to fight the dark forces attacking the town, not only to survive, but to prevent the evil; from spreading.

As I said at the beginning I enjoyed reading this, the writing is excellent and slips through without any great effort and I'd finished the book almost without reading it. The author writes well, setting the scene with skill and maintaining the pace needed for a tale like this.

For me there were two down points to the book, the first was the conclusion, after the excellent build up it all ended a little easily and quickly. In fairness this isn't a big complaint, the ending is a satisfactory one.

My other issue was the evil itself, I'm a reader that enjoys learning about the dark forces as play and I would have liked to have discovered more about the entity causing the evil at the heart of the story. Again it's a minor issue, but one that along with the first marred the ending for me, but not enough not to recommend this as a decent horror read. 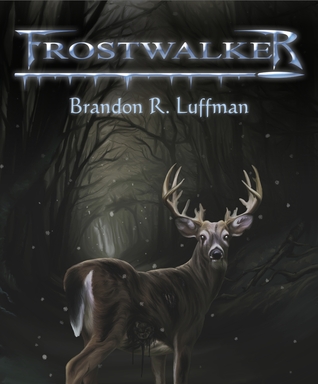 When his small hometown of Wynn falls under an ancient curse, Jake will find himself in a battle against creatures worse than any he’s faced in a game. Playing for keeps, it will be geek versus god in the fight to stop an evil force bent on destroying everything he holds dear.

The Geek Shall Inherit The Earth – If They Live Long Enough.

Frostwalker is available from Amazon (and is a decent horror read)

Posted by Michael Brookes at 09:27