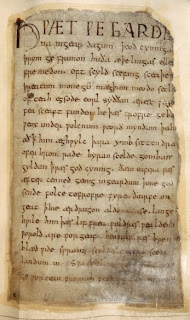 Beowulf is the latest in my Drabble Classics series where I take classic pieces of literature and recreate them in drabble form. As always the drabbles are posted first in the Indie Book Bargains newsletter (www.indie-book-bargains.co.uk) which is a great place for a daily drabble and the latest Kindle bargains.

I first read Beowulf when I was in school, it's a good example of Saxon epic poetry and is considered one of the earliest examples of classic English Literature.

You can read the rest of the Drabble Classics series here:

And now, let's enjoy this classic tale in drabble form:

King Beowulf’s final battle was against a dragon enraged by a theft from its horde. All but loyal Wiglaf abandoned him and together they slew the dragon, but Beowulf was mortally wounded and buried with the cursed treasure.
Posted by Michael Brookes at 11:47