Welcome to Marianne Spitzer's blog tour for her new book 'Gypsy Spirits'. You can find out more about book below, but first she has written a guest post about how literature affects her as a writer. You can also enter a free giveaway to win a copy of 'Gypsy Spirits'. 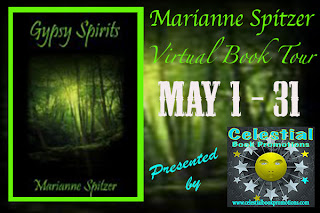 DOES LITERATURE AFFECT A WRITER
By Marianne Spitzer


I have enjoyed writing for as long as I can remember. Reading was a bit more difficult. I attended Catholic school for first grade through eighth. Try as I might, I don’t remember a library in my grade school. Each class room had books for reading, but they all had a religious theme. How did I find and fall in love with mysteries and horror?


The start came in the form of a neighborhood boy whose mother believed reading was important and purchased several Hardy Boys books for him. I read them and was hooked. Toward the end of that school year, I turned twelve. It was a wondrous number. I could get my own library card at the local public library. After several days of driving my mom to distraction, she took me to get my card. We were going to the public library, a building I had never seen.
I was amazed at the size of the two story, stone building. It was half the size of my entire school. The entrance was at ground level, but the children’s library was half a flight of stairs down. I could see the adult library half a flight above. I never imagined there were so many books in the world much less our town. My mom and I filled out the necessary paperwork and in minutes I was holding my very own library card. A small, lightweight cardboard, orange card with a small metal square in the corner, and it was mine—all mine.
I asked the librarian where the Hardy Boy books were and she inquired about why I wanted to read them. I began to explain my love of the books, the mysteries, detectives, and solving crimes. She leaned over and whispered, “There are girl detectives, too.” My glee must have been apparent because she led me by the hand to one of the greatest sights I had ever seen. In front of me I saw a bookcase with two rows of Nancy Drew books. I was delighted.
Only being able to borrow three books at a time and having to convince mom to drive me to the library every few days, it took most of the summer to read all the copies they had. Then I resorted to writing my own mysteries and the writer in me was born.
A few years passed and I was old enough to enter the sacred adult library and its vast treasury of books. It was there I discovered classics such as Dracula and Frankenstein. I also had a love affair with Sherlock Holmes thanks to the brilliant writing of Sir Arthur Conan Doyle. Ready for a step into darkness brought me to the horror section. I discovered Poe and H.P. Lovecraft among others. It was Lovecraft and Poe who also taught me what it’s like to get through a day without any sleep after reading their work before bedtime, and not being able to sleep.
Each one of these books and authors helped bring me to where I am today, a mystery, supernatural, horror writer. There were many other books and authors along the way. I also read other genres and many classics. Every book and genre a person reads makes them a better writer. While it is important to write, it is also important to keep reading.
Today, I still love mystery and horror, but those Nancy Drew books hold a special place in my heart. I purchased every available book for my daughter when she was a pre-teen. She still has them stored safely away. I recently purchased a copy of the 80th anniversary edition of the first book in the series. I have it displayed for all to see. After all, The Secret of the Old Clock was my first step into this author world I love.

“…the characters immediately grabbed my attention. People were dying and mysterious things were occurring. This kindled my curiosity. As I got deeper into the book, the plot became more and more twisted. Then the story wouldn't let go of me. I'm normally pretty good at figuring out how stories are going to end, but this time I wasn't. I congratulate the author for having me completely fooled as to how the book was going to end. Not many can do that, so I look forward to reading more from this author.” – Lisa on Amazon
“Highly recommend this book. Excellent story mixing love, family matters, mystery and spirits. The end will really surprise you as it did me.” – Carolyn on Amazon
About Marianne Spitzer
I was born in Milwaukee, and lived there until I was eighteen. Then I spent eight years in Washington state and California before returning to Wisconsin. I love eerie places and books. I began with a love of Nancy Drew books and as I grew I found H.P Lovecraft, Agatha Christie, and Sir Arthur Conan Doyle among others. When I am not writing, I am reading or watching sunsets. I have been writing short stories since I was in grade school. Most were in the form of essays relating real life events. Many were purely imaginary trips to magical places and times. I enjoy making up stories about people I meet or see on the street. I can see a story in a picture, especially if the picture is eerie. My imagination runs wild and free. I have self-published a book of essays and a book of children's stories for my granddaughter, Brittney. Gypsy Spirits is my debut novel and the first in the series of three "spirit" books. I have self-published the second "spirit" book, Annamarie and Magdalena. I also self-published a supernatural mystery, THE LETTER. I plan to have the sequel to THE LETTER out this year and the third "spirit" book available winter 2013/14. From there I am sure my muse will guide me into another story plot.
a Rafflecopter giveaway
Posted by Michael Brookes at 08:02