Book Impressions - Diary of a Parallel Man by Mahershalalhashbaz

This book is one of those most wondrous of things, a gift of a book that I probably would never have read that turns out to be amazing. And this is an incredible book.

The story takes the form of a diary written by Mahershalalhashbaz (or Baz for short). He is born in a world where the fall of man never happened, Adam and Eve passed God's test and as such they and their decendents were blessed with eternal life and live in Eden, a paradise that stretches across the Earth. God is also known to them in person, he is not a matter of faith, but of reality.

Already I was hooked on the idea, what would such a world be like? But Baz discovers a way to cross into our world and that is what concerns the story. It is wonderfully written, the culture shock for Baz is immense. His simple observations strike to the core of some of the absurd and terrible aspects to our lives.

He meets Kirsty, a young woman who helps him. She is a staunch atheist and he of course is a believer, he has met God in person.

It's a great story from start to finish. My only mild complaint was the ending felt a little abrupt, but that didn't mar my enjoyment.

I highly recommend this book. Read it now :-) 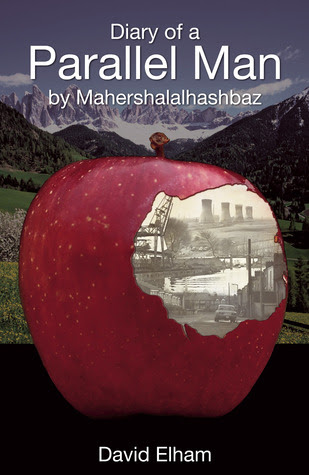 Imagine a world where God is a proven reality. Adam and Eve have passed the test of obedience and have been granted everlasting life for themselves and their offspring.

What if a man born in that world suddenly found himself in ours?

This is the story of Mahershallalhashbaz, told in his own words.
It is the story of a massive clash of cultures, of ethics, of truths; the story of a man who deals only in absolutes having to live in a world where nothing is certain, where people struggle with conflicting beliefs, and live only to die.

Surviving on Manchester’s streets, he relies on the one person to have shown him kindness in this bewildering reality, a young woman named Kirsty.
She is a staunch atheist – he knows that God exists for sure. But as their friendship grows, both of them begin to see life from fresh perspectives.

As he searches for a way to return to his own dimension, he wonders why his God and Father remains ever silent as the innocent suffer and the world’s populace staggers from one disaster to the next.

Why has the Father abandoned them? Is it really as simple as Obey or Die?

Posted by Michael Brookes at 08:12