Guest Post - Why I Write by Erren Grey Wolf


Why I Write By Erren Grey Wolf
Author of Beneath the Surface: The Lost Boy

Long ago, when I was a teenager, I used to daydream about living somewhere else and doing fantastical things, but as my mood was dark, these daydreams were not "airy fairy nonsense." They were deep dark themes. I wrote down some of the stories in my head but when I had a nervous breakdown in 1994, I threw out all my notes and illustrations. Years after that, when I wrote them down again, I found I had not lost anything. I remembered the scenes in my stories vividly. As for the drawings, there was one spaceship I designed using the Divine Proportion, which was fantastic because I remembered the measurements exactly and drew them again in a sketch book. Later, I crafted it in Photoshop for perfect outlines. This spaceship, however, won't be seen until later in the series.

I never did much with my stories until I had a second breakdown at the end of 2004. I ended up in the hospital because I was so terrified that aliens were going to abduct me, I did not sleep for a week. I did not fall asleep for one single minute and hid in the laundry room at  night. After almost a week of not sleeping, I very nearly collapsed and ended up in the hospital. This was a very beneficial thing, for once I was given medicine for my mental illness and the terror in my heart was quelled to some extent and the depression lifted, I was finally able to write my stories!

In 2005, I began to seriously type my stories into the computer from my written notes. What I thought would  be one book ended up exploding into a whole saga! The creativity poured out of me as if it had been blocked for too long. I have been working on the series since then, but have only published one book so far, even though most of the series has been written. I am aiming to publish the second book in May and the third book later this year. There are several books following that which need more polish, but are, for the most part, finished.

As a result of my mental illness, which was diagnosed as Schizoaffective Disorder, which is Bipolar Disorder with some symptoms of Schizophrenia (I hear voices), my ability to write depends on my mood. It took a while to become stabilized on medicine in order to function as a normal human being. The progress has had its ups and downs. Sometimes I can become so depressed that I cannot even get up out of bed. When that happens, the doctor adjusts my antidepressants and then I can get back to work on my novels. I am told that my illness is like a biochemical malfunction in the brain and doesn't really have to do with what is happening in your life. Some say it is a genetic defect. (I think it's the result of trauma by aliens!)

You may think I am not wholly sane, but damn am I creative! I live to write! Even if you don't believe the bit about aliens, you'll love the stories that I write about them! The aliens are introduced in book four, so you'll have to wait, but getting to that point is an adventure! If you are rather empathic, however, I warn you that my stories are rather dark and full of sorrow. My Mum cried when she read the first book about The Lost Boy. It tugged at her maternal heartstrings when the little boy was abandoned in the forest by a grieving older brother. She said she wished she could have picked him up and given him a hug. That was her reaction. I don't expect everyone to react the same way. Dad didn't cry, you see. He's too logical. He enjoyed the science fiction aspect of the book more so than the emotional parts.

The whole series of Beneath the Surface is about two brothers named Sean and Erren Archer who live in the future on a distant world far from our destroyed Earth. The first book, The Lost Boy, begins aboard the space station, Titan, but only for the first two chapters. The rest of the book takes place on the planet Midgard, third from the sun in the Frey Solar System. While the Archer family is en route to Midgard, Bridget goes into labour prematurely and dies aboard The Migrant Swan. Erren is born from the womb of a dead woman while the spaceship is within the Void between places. Two years later, on Midgard, Sean abandons his little brother in the forest out of grief, but later hunts the haunted forest searching for Erren and redemption.

You might ask me, "Why does one of the characters have the same first name as yourself?"  As I said at the beginning: long ago, when I was a teenager, I used to daydream about living somewhere else and doing fantastical things. Erren Archer is my alter ego. He and Sean both have telepathy and the ability to see auras and elementals (fairies), as well as angels. I wished I had those abilities and so fantasized about them. I also fantasized about having an older brother who cared about me. In the first book, Sean doesn't care, but later he does and looks out for his little brother. Throughout all their hardships in the series, Sean is always trying to protect his younger brother. It's a fantasy, you see, because I wish I had someone who could protect me.

If you would like to find out more about me and my books, check out the following: 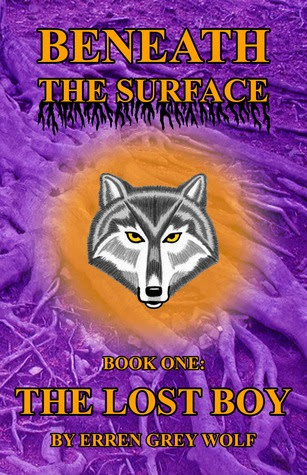 You can purchase The Lost Boy on Amazon.

You can find more about me and my books at the following links:

Posted by Michael Brookes at 12:58