Martin Hill joins us for today's guest author interview, read what he has to say below: 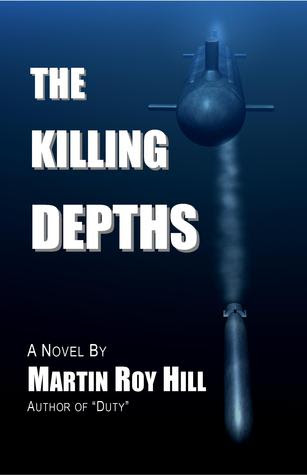 Please introduce yourself, who are you and what do you do?
Hi, I’m Martin Roy Hill. I’m the author of two books, “Duty: Suspense and Mystery Stories from the Cold War and Beyond,” and “The Killing Depths,” a military mystery thriller. Both are available from Amazon.com.

I spent many years as a journalist – police reporter, investigative journalist, newspaper editor – but gave it up ten years ago to become a medical capabilities analyst for the U.S. Navy. We determine what kind of medical requirements are needed for various combat scenarios. I’ve bee a medic of one type or another for the U.S. Coast Guard, Navy, law enforcement and a federal disaster response team.

When I’m not working for the Navy or writing, I’m a medical service corps officer with a component of the California National Guard, and a member of a local disaster medical response team.

What first inspired you to start writing?
A high school English teacher got me interested in reading the likes of Ernest Hemingway, and that got me hooked on writing. I began studying journalism in high school, and started writing short stories.

If you could write anyone's biography, whose would it be?
I think Teddy Roosevelt. He was a man of so many natures – intellectual, athlete, soldier, outdoorsman, statesman – not unlike Winston Churchill. I don’t think you could write a boring biography of TR.

What is your favourite novel and why?
I’ve read so many wonderful novels in so many genres it would be unfair – in fact, impossible – to point to one and say that’s my favorite. I love Hemingway’s “The Sun Also Rises,” and have reread it several times. I think Anton Myrer’s “Once an Eagle” is an epic work of war fiction. I’m also a fan of science fiction masters like H.G. Wells and Robert Heinlein. So many great books, so little reading time.

What do you enjoy most about writing?
I love it when the piece I’m writing becomes so focused and clear in my mind that scenes seem to write themselves. The story seems to come alive for me. It’s that rush, I think, that becomes addictive.

And the least?
Writer’s block – when I get stuck on a scene and I just can’t see the story from that point on. When that happens I have to walk away from what I’m working on and let my subconscious work on it.

What are you working on at the moment?
I’m on the final draft of another mystery called, “Empty Places.” It takes place in the 1980s. A war-weary journalist returns to the States from covering the conflicts in Central America, discovers his ex-wife has been murdered and finds himself the next target of her killer. The storyline is wrapped up in all the events of the Reagan era—the Contras, the Great Recession, the political corruption, and such. I’m also finishing up the first draft of a sci-fi novella.

Tell us about your latest work and how we can find out more.
“The Killing Depths” came out late last year. It features Linus Schag, an agent afloat for the Naval Criminal Investigative Service who investigates crimes aboard naval ships at sea.

Schag is sent aboard the USS Encinitas, the Navy’s first attack sub with a male and female crew, to investigate a reported suicide. But Schag quickly realizes the crewmember’s death was the work of a serial killer. Before the sub can return to port for a proper investigation, the Encinitas is ordered on a covert mission to hunt down and destroy a renegade Iranian sub armed with nuclear missiles. As the sub crew engages in a life or death struggle with the Iranian sub, Schag has to discover the identity of the serial killer before his – or her – blood lust destroys the Encinitas.

“The Killing Depths” is available from Amazon.com.

Thanks to Martin for sharing his thoughts and Monday we welcome Rita Lee Chapman to the hot seat.