Guest Post - Means to an End(ing) by Elizabeth Good

Means To An End(ing) by Elizabeth Good

“Frankly my dear, I don’t give a damn.” We all know that famous line, now don’t we? But in actuality, the word ‘frankly’ is not in the original book, but it is spoken in the movie version. We also know the final words optimistically uttered by the heroine, the protagonist, Scarlett O’Hara, “After all . . . tomorrow is another day.”

If you’ve read Margaret Mitchell’s book, or if you’ve only seen Gone With The Wind, the movie, you undoubtedly were struck by the ending. You either loved it or you hated it. Perhaps you felt cheated, robbed of a Disney-esque, happily-ever-after ending and, maybe, were upset that a satisfactory conclusion may never be written. You either desperately wanted Rhett and Scarlett to be reunited in the end—or—didn’t care either way, and perhaps you loved the Civil War-torn, Southern belle story in its entirety.

In Margaret Mitchell’s case, she refused to write the sequel to Gone With The Wind. Ms. Mitchell admittedly did not know what happened between Rhett and Scarlett, nor, seemingly, did she care. However, she did say, “For all I know, Rhett may have found someone else who was less difficult.”

What intrigues me the most is that Margaret Mitchell obviously wrote the ending ‘her way’. She did not worry what the masses might think of it or how well it would be received. Of course, we know both book and movie became blockbusters in their own right!

The eventual sequel, titled Scarlett, was authorized by Ms. Mitchell’s estate to be written by Alexandra Ripley, and was made into a 1994 television mini-series. Truth be told, I enjoyed Ms. Mitchell’s original cliff-hanger ending much more than this add-on story. Based on Scarlett’s strong and determined personality, the future of Rhett Butler and Scarlett O’Hara would have been better left to our own imaginations.  Oh fiddle-dee-dee . . . I say leave well enough alone.

I can answer those questions in regards to my own writing. I knew exactly how my book, Just Another Sunday, had to end. There was no doubt in my mind that I needed to remain true to myself and not worry how popular or unpopular the ending would be to readers. Much like Margaret Mitchell’s ending to Gone With The Wind, I left the conclusion to the eyes of my readers——for them to decide what my protagonist, Lia Benedict, does with her future.  For the astute, insightful reader, I have left many clues (obvious and otherwise) to not hang off the proverbial cliff and satisfactorily glean Lia’s outcome.

I could not, in good conscience, sell-out or compromise the messages I intended to convey. My novel, which is based on personal, real life events and circumstances, is ultimately a book about Fate. It is not about happily-ever-after walking off into the sunset, and the ending needed to reflect the flavors of my book——how the interplay of free will and fate decides the paths we take in life.

Some readers may desire endings which are wrapped up in neat little bows, and when the last page is turned they may want to feel all warm and fuzzy inside. That’s great, but not all books should end like a romance novel.

Your ending, done your way, should give you, the author, the fuzziest and warmest feelings of all.

Thanks to Elizabeth for writing the guest post,she is also the author of 'Just Another Sunday', check out her book below: 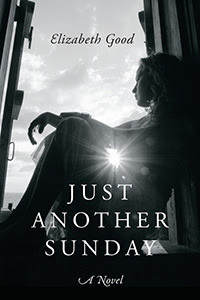 Set against the backdrop of the turbulent late 1960s and early 1970s, Just Another Sunday is inspired by actual events and follows Lia Benedict, a teenager growing up in the suburbs of New Jersey. In the spring of 1968, Lia is 15 years old when her Italian-American family decides to leave Brooklyn for their dream home in the suburbs. But Lia is reluctant to pull up roots and go anywhere, especially to some godforsaken Jersey town. "I would rather thrive in the grime of New York than be plucked from my roots and transplanted in Nowheresland, just to wither away and die. I swear this is the kiss of death." Her father, Frank Benedict, has worked hard to afford his own home for his wife, Marie, and five children after years of renting in Brooklyn. With the recent marriage of their eldest daughter, and visions of grandchildren in their future, new life in suburbia couldn't be more promising. But their dream home quickly becomes a living nightmare, and the family's move will prove to be the last they will ever make as an intact family of seven. Just Another Sunday is a compelling five-year snapshot of one woman's life, taking us through teenage angst and rites of passage, new love and broken hearts, friendships and betrayal, triumph and tragedy, and one family's struggle to cope with the inconceivable. You will search your soul and ponder Life's most provocative questions as you experience the unforgettable conclusion to Just Another Sunday.

Posted by Michael Brookes at 10:24