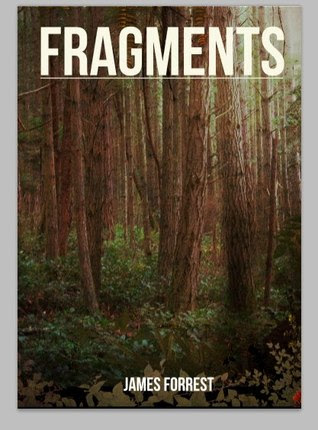 Please introduce yourself, who are you and what do you do?
Well first, thanks for interviewing me Michael. My name is James Forrest, and I’ve recently published my first book on Kindle, entitled Fragments. It’s a book of stories, some long and some short, many of them pieces of things I’ve been working on for a while, hence the title. I’m in digital publishing, doing magazines and stuff. I keep a pretty regular blog on Scottish football, “On Fields of Green”, and myself and my editorial team are working on a book right now about the long, crazy year in the Scottish game that was Feb 2012 – Feb 2013. As of today (Feb 25 2013), I’m editing my first novel, with a view to publishing it shortly, and I’m working on my second.

What first inspired you to start writing?
That’s a good question! I’ve always like to read, and I’ve been writing since I was a kid; literally. I wrote my first ever fictional piece when I was in Primary School, so I’m told, about a wee boy who finds an alien spider on his window … and I’ve been writing ever since.

Who is your favourite author and why?
I worship Thomas Harris. Harris has a style of writing I admire enormously, an almost poetic style. He understands his characters brilliantly. He has created one of literature’s greatest heroes, in Clarice Starling, as well as one of its great monsters in Hannibal Lector. It would have been easy for Harris to have written one dimensional characters. Hell, most other writers do just that. But he didn’t. Starling is flawed, even broken. She has great integrity, but no respect for authority. Lector’s brilliance does not detract from what he is. Most vitally, Harris makes us sympathise with Lector by the way he contrasts him with the other monsters of the books. He gives us evil so profound you end up seeing Lector as a positive force, in some ways. This too is a standard technique … but Harris has one last card to play; he makes his monster’s sympathetic too …. Francis Dolarhyde is a wonderful creation, because he hates and fears his dark half; Jame Gumb’s self-loathing is so profound he’s spent a lifetime trying to be something else, and in Hannibal, which is a magnificent work, you have the monster in the bed, Mason Verger, who drinks martinis made with the tears of children he’s terrorised, who aims to have Lector eaten by pigs … but who himself is a victim of the Dr’s own appalling proclivities. And he, in turn, is almost overshadowed by the amoral Paul Krendler. Harris is incredible at that. He creates characters so vivid and real it’s breath-taking.

What is your favourite song lyric?
Great question! I’m a big music fan, and I believe the best musicians are, in some way, storytellers. I love Dylan’s brilliant lyrics, and I love The Rolling Stones, who’s lyrics are often seriously under-rated and missed because of the genius of the music and I think country music tells some amazing stories; Kenny Chesney in particular is evocative and brilliant. But Springsteen reigns supreme. His work is masterful. A storyteller par excellance. I mean, take Brilliant Disguise. What a wonderful song, in every way. “So when you look at me, you better look hard and look twice, is that me baby, or just a brilliant disguise?” I love those lines. If I had to pick a favourite lyric – if I had to – it would probably be from one of his recent tracks, the song “You’ll Be Coming Down.” I love that song. It appeals to me for a number of reasons. I like the notion that all glory is fleeting, that those who are on top won’t be there forever. The verse I find most evocative is this one; Easy street, a quick buck and true lies, Smiles as thin as those dusky blue skies, A silver plate of pearls my golden child, It's all yours at least for a little while. You'll be fine long as your pretty face holds out, Then it's gonna get pretty cold out. An empty stream of stars shooting by, You got your hopes on high. I just love that.

What do you enjoy most about writing?
Everything. Full stop. I love the moment when something I write hits someone, and resonates. There’s nothing like it in the world. But it’s the simple act of sitting in front of the keyboard, and looking at the blank page. I hate to say it out loud – it sounds pretentious beyond belief – but writing is as close as we mere mortals get to being God. That blank page is nothingness, it’s a universe waiting to be created, and the act of writing is building that universe one brick at a time. I like to tell the story about how there was an American writer who created one of the most vivid characters in all of fiction; a young, vibrant, bright, sensitive young woman. He gave her a job, and a life, and a man she loved. Then he challenged her with a moral dilemma. He gave her a chance to steal a large sum of money, and she took it. She went on the run. And on her second night of running, as she was beginning to think about pulling her life back together, she spent a night in an old off-road motel … where the proprietor murdered her. Robert Bloch must have felt superb creating Marianne Crane. Especially as she was only a vehicle through which he introduced us to Norman Bates! I have always wished I’d read that book before seeing the film … I had a similar “OMFG” reaction to a scene in A Storm of Swords. That’s what I love most about writing … creating the world and then doing to it whatever the Hell I want …

And the least?
Editing! Uuugh! I hate editing with a passion. Soul destroying stuff.

What advice would you give new and aspiring authors?
Ha! Welcome to the party! I am one myself! You know what though? I’d tell them to believe. Believe in what they’ve got. Don’t waste time reading all those How To Write A Bestseller books. Sit down and start writing. I’d tell them to read The Lord of The Rings. I’d tell them to read Silence of the Lambs. I’d tell them to read The Runaway Jury. Story. Story. Story. It’s everything, and if you can spin a good yarn, tell a good tale, you’ll be forgiven for a multitude of other sins. I think a lot about how Tolkien ignored every convention in the writing of the Lord of the Rings, and it’s still one of the finest pieces of literature of all time. The hacks don’t know. The critics know even less. Story is everything, and if you’ve got that you’ve got the stuff. Believe it.

What are you working on at the moment?
Right now I’m editing my first novel, which has been finished for about five years and was allowed to rot until now. It reads a lot better than I’d thought … and that important thing, Story, is definitely there. No doubt. What’s much more fun is that I’m presently writing my second novel, which is about a bio-terrorism attack on Glasgow. Glasgow, my home town, is my favourite city in the world and I very much want to give it the mythology it lacks. It’s fantastic being able to write about familiar places, in unfamiliar circumstances. Two chapters of the novel are in Fragments, my book, and in the second of them, A Civilian’s Story, I gave my brother in law the death scene he wanted, at the location of his choosing … but in a different way than he ever expected!

Tell us about your latest work and how we can find out more.
Well, Fragments is available on Amazon Kindle just now, and there’s my football blog “On Fields of Green”, as well as the Facebook page for my book at:

And with that I’ll bid you farewell and thanks for letting me ramble!

Thanks to James for sharing his thoughts with us, on Wednesday we welcome SKN Hammerstone to the hot seat.