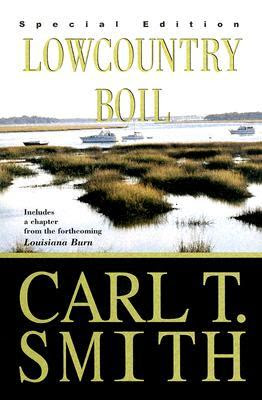 Please introduce yourself, who are you and what do you do?
I am Carl T. Smith. I am an author of five books in the literary suspense category with a background in theatre and music. My novel Lowcountry Boil won the Suspense Award from the International Independent Publishers Awards, was nominated for The Southern Critic’s Circle Award for “Book of the Year” and the SIBA “Book of the Year”. Louisiana Burn received the same accolades. My books have been endorsed by Pat Conroy, Steve Berry, Carolyn Hart and others.

What first inspired you to start writing?
I think it came naturally; however, my college roommate, Tom Robbins (“Even Cowgirls Get the Blues”) had the most to do with it, as well as college bud, Bernard Martin, an internationally-known painter, who designed covers for Robbins’ Skinny Legs and All and my book, Nothin’ Left to Lose. Pat Conroy and Les Standiford have been huge encouragers.

Who is your favourite author?
My favorite author is difficult to choose. Greg Iles and James Lee Burke come to mind first, and they have had a great influence. In addition to Conroy, of course. All three of them have great lyrical qualities, which I have tried to emulate. They also write character-driven books as do I.

If you could write anybody's biography, whose would it be?
Write someone’s biography? Wow! Maybe James Lee Burke. We have a lot in common in interest, and personal background. It would be exciting to investigate where his style and philosophy developed. And, I love New Iberia and the Cajun country. (See Louisiana Burn).

What do you enjoy most about writing?
Without a doubt, I love to see characters develop, despite the fact that they don’t always develop or act the way I anticipate. That is the most stimulating element. Not knowing. Many of my characters do things that would seem uncharacteristic of them, but don’t we all? I really enjoy getting inside their heads and emotions.

And the least
What I enjoy least. Hitting a wall. Not writer’s block, just not knowing where to go with a thread of the story. Sometimes it has required me to eliminate a character that I love, who doesn’t move the story forward. That and facing a question that doesn’t have an answer. Otherwise, I enjoy all aspects of the process except the “business” end. I miss the book tours with books presently being electronically promoted as much as they are.

What advice would you give new and aspiring authors?
My advice? Read. And write. I think beginning writers should try to develop a cadre of friends that are not writers. Writers are acceptable as well, but don’t limit oneself to those only. Observe people as if you were playing a role and needed a character model. Find a couple of people whose opinion regarding reading material you respect and ask them to read your work. In whole or in pieces. We all need validation and encouragement. And most important: Don’t get discouraged by rejection. Lowcountry Boil has sold in the neighborhood of sixty thousand copies and it was refused by agents and publishers forty-eight times. Conroy once told me, “Carl, there are better books than those written by Hemingway, Faulkner and Fitzgerald in a drawer somewhere, because the author couldn’t face another rejection.” I believed him.

What are you working on at the moment?
At the moment I am writing what I would call a “Big Book”. By that, I don’t mean in length or scope, but “big” in the sense of complexity. Most of my books have some basis in fact even though they are fiction. Would you believe “Faction”? Terry Kay once told me, “Don’t write the books in you; write the books around you. All you have to do is look and listen.” The present work, as yet untitled, involves some areas in which I have had to do quite a bit of research. I don’t write a lot of minutia, so it’s not overwhelming, but I do want to be accurate. Hopefully, it will be out late spring or early summer.

Tell us about your latest work and how we can find out more.
The present work, set again in the lowcountry of South Carolina, revolves around the investigation—by a psychiatrist who is fascinated by puzzles—of the unsolved disappearance of two people and the suicide of a third. It has a wonderful cast of characters including the psychiatrist, her assistant who is a writer on hiatus, a retired police detective, who is reminiscent of Christopher Plummer in attitude and demeanor, and a married couple who are tech geniuses. Every character is as diverse as one can imagine. I will be giving updates on my website: www.carltsmith.com and my blog: Carl T. Smith Blog and on Face Book and Twitter. I welcome “friends” and “Followers”.

Thanks to Carl for sharing his thoughts with us, on Monday James Forrest takes his turn in the hot seat.