I first interview Nicolas Wilson back in April (you can read the original interview here), I recently caught up with him to see what he's been up to since then, you can find out more below:
﻿ 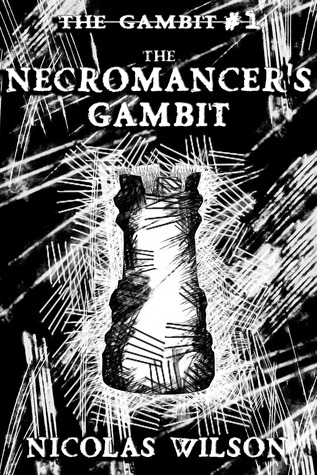 What has changed in your life since we last spoke?
Well, I have to think the wedding is pretty new. You and I did our first interview before my practically-a-wife-anyway girlfriend and I eloped, and the interview went live not long after. It's mostly coincidence, but after that, I had a pretty productive several months, in which I revised about 100 of my older short stories and compiled them into collections, one of which has yet to be released, and polished up four more of my older novels, the last of which released at the end of October. That alone feels like a huge weight off my chest. Those early novels needed a lot more cleanup than my newer work, but having them weighing me down prevented me from being able to get through the newer work.

I'm writing the first draft of a psychological thriller for National Novel Writing Month this November, and it'll be my first new writing in around a year, unless you count a short novella I wrote in the spring, for my mailing list subscribers, and the ending to a novel I'd been working on the first draft of, on and off, for two years. I've only got a few projects to revise for my 2014 publishing schedule, so I expect to start working on sequels soon, as two of my new releases are intended to be the opening of series.

Have you learnt any new wisdom?
Always. Right now, I'm in the process of learning the importance of finding a balance between creating new projects, and finishing old ones. For years, I convinced myself I'd have time to revise things later- I just had to write this idea out now. I shared a chapter a week on my blog, and while they were polished enough for that, they weren't ready for publication as ebooks. I wrote 9 novels in 2-3 years, and never had enough time to polish them up to completion. In some ways, I think that was me procrastinating. But I also think it was me recognizing that they weren't quite ready, yet- and neither was I, as an author. I did lots of polish drafts, but they were just never quite there.

I love first drafts- it's the part of writing where you can fall in love with new people and new ideas. But hoarding those drafts in my closet doesn't do anyone any good. And so I've had to deprive myself of that first-draft joy for a while, now, to whittle the backlog down. It's been fun rediscovering my old jokes, and falling for the same stories all over again. But editing is always closer to work for me than that first draft. And it turns out my wife is a bit of a slave-driver. So it's been grueling.

Have you become a better writer? If so, how?
I'd say I've learned a lot more about how I work. Two years of NaNos gave me the ability to gauge the kind of quota I can expect from myself, but a year of revisions has made me look at the way that I write, the kinds of elements that I usually need to tighten after the fact, and which of my beta readers' notes usually recur between novels. I don't think my self-edited work, like the short stories or blog-serialized chapters, was bad, but I definitely developed some bad habits.

Whores, the novel we spoke about last time, was actually my fifth novel. And it was also the first one that I felt was ready, and done. It set a bar, for me, that all of my work had to be that polished before I put it up for public consumption. So after Whores, it was important to me to present my novels, in the order they were written so that readers wouldn't be shocked at the progression of my voice or work.

Early next year, you'll have the chance to read my sixth (published) novel, Homeless*, and the tone is quite different from Dag or Nexus, my earliest novels, and I think it's just stronger work. Things that used to take me several drafts to get right I get in a draft or two. I've heard sculpting described as removing all of the pieces of the stone that weren't part of the finished piece- and I've learned how to get to the heart of my work much more quickly.

What are you working on at the moment?
At the moment, I'm in the final edit on Banksters, a sexy, slow-burn financial thriller. That'll be out of my hair in a week or two, though, and then I'll be jumping into National Novel Writing Month on a psychological thriller/horror, Twist, as well as helping a few authors I know prep for their own NaNo, including my sometimes writing buddy Katie de Long. It's tradition, at this point, for me to do NaNo, and to serialize it on my blog every day, as I write it. Banksters began that way in 2011, and 2012's project, Singularity, is on my revision list to finalize and publish next year. So if you drop by the blog on NicolasWilson.com after November 2nd, you can witness a very disturbing form of performance art, though one which features a (usually) only metaphorically nude artist.

Tell us about your latest release and how we can find out more.
The publication date for Banksters snuck up on me while I was working on this, so initially I thought I'd only be able to give you the info for The Necromancer's Gambit, my other most recent release, but Banksters is out now, too. I think the Necromancer's Gambit is probably closer to your speed, though. It's a dark urban fantasy, verging on horror in some places, about a group of modern magicians fighting off an insurrection. Part film noir private investigator story, part buddy comedy, and part explosive action story, with a dose of mythology and magic on top. And unseemly activity with corpses. Because if someone doesn't have unpleasant sex, I can't be sure I actually wrote it.

The Necromancer's Gambit is available from these fine etailers:

Books by Nicolas Wilson on Amazon:

Posted by Michael Brookes at 13:11