Redemption Protocol is a fun science fiction epic. It starts with John Havoc being tricked into murdering hundreds of thousands of people in a mission that goes wrong. He later wakes up on the first contact mission humanity had undertaken. The Alliance mission is not alone though, other human powers are seeking the prize for themselves.

The book has a very cinematic feel to it, so much so that it almost plays like a film and could easily be portrayed on the big screen. It is action packed being on the military side of sci-fi, the technology is consistent and interesting without bogging itself down in unneeded detail.

While Havoc is the main charcter there is an interesting mix alongside him, although a few of those are a little underdeveloped, the main protaganist in particular feels a bit obvious and without depth. But that is a minor issue and does help keep the pace of the story.

In a similar vein the opposing civilisations are a bit obvious, but mean the battle lines are clearly drawn. Like any good thriller it also has some good twists and turns to keep you on your toes.

Although its strength is the action it does have another card to play. The interaction with the alien information system is very nicely done and again in a very visual way. I would have liked to have seen more of this side of the story as it works as a good counterpoint to the action heavy story.

Overal I'd rate this as an excellent science fiction read and is the start of a series that I will be sure to check out. 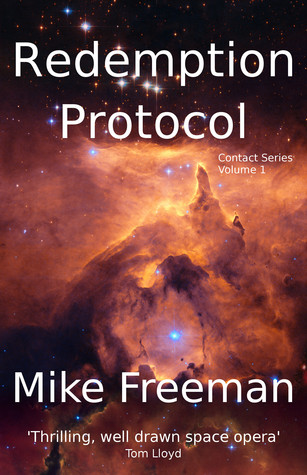 John Havoc was betrayed into murdering over three hundred thousand people with a biological weapon. The only thing left in his hollowed out world is retribution.

Havoc is drawn into a top secret Contact mission – humanity's first – after an extraordinary energy source is detected at the limit of reachable space. While the crew of the AV Intrepid struggle with saboteurs and hostile ships, they fail to realize that the alien world holds dangers that threaten far more than their ship. Imprisoned on Plash is a weapon of unimaginable horror – a species eliminator.

REDEMPTION PROTOCOL is a hard hitting space opera/ scifi adventure. It is the FIRST book in the Contact series.

Redemption Protocol is available from Amazon (and is an excellent read)