I first interviewed L M Steel back in April (you can read her original interview here), I recently caught up with her to see what she's been up to since then, you can find out more below:
﻿ 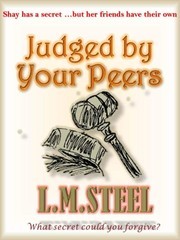 What has changed in your life since we last spoke?
Wow, so much.
I received a small promotion in my day job which has had its own ripples.

I went through a great personal loss when my father became ill and sadly passed away in February from cancer.

Then in August I got married (civil Partnership)to my beautiful wife Alexandra.

In my writing life I am now working with a small hybrid publisher to get my works into print, they are now going through the editing process so hopefully in the new year they’ll be ready for press.

Have you learnt any new wisdom?
Time with the people you love is the most important time you have, cherish and don’t wish it away or hurry to be somewhere else, even if it’s writing.

Have you become a better writer? If so, how?
I think I have become calmer and more patient with it,: I’m not going to write the next Man Booker Prize novel in a day, I may never, and that’s ok, as long as I am happy with what I am doing.

What are you working on at the moment?
I’m about to go into NaNoWriMo with the same story I was going to write before (I had to drop out last year as it was when my father first fell ill.)

They are a rather nasty family of small time gangsters who have a few secrets...and bodies buried.
It will be a trilogy called Birds of Prey. The first third of the trilogy will be called The Heligoland Trap (although that it is a working title,)

Tell us about your latest release and how we can find out more.
Judged By your Peers:

Shay believes she has the worse secret in the world, but unable to keep it in anymore she confides in her work friends that her marriage is failing because she's gay. The response Shay gets is overwhelming, in more ways than one: Her friends take this opportunity to confide in Shay their secrets: An Alcoholic, An Adulterer, A Thief, A Racial Extremist and … A Paedophile?

Also Available on, Barnes and Noble, Sony Reader, Diesel eBooks, iBooks.
Unfortunately due to the eBook Crisis with WH Smiths in Britain, at the moment I am not available on KOBO, however we’re all hopeful this will be resolved soon.

I can also be found on G+, Pinterest, LinkedIn and Goodreads.