I've not watched this film in many years so I thought I'd give it another watch to see if it stands up and I'm pleased to say that it does. It's an unusual horror film that says more about the imagination and its ability to conjure terror, especially when helped by copious indulgence in opiates!

The film tells the story of a night hosted by Lord Byron when he is visited by his friend the poet Shelley and his mistress (later to become Mary Shelley), from this party two classics of the horror genre are spawned Polidori's 'The Vampire' and Shelley's 'Frankenstein'. The party starts with a sceance to create a ghost built from all of their personal fears. Their creation then haunts them through a horror filled night.

The characters are a joy to watch and are a mixed bunch, I always enjoy watching Gabriel Byrne in action and his ability to play dark characters works well with his portrayal of Lord Byron. The other charcters are fun as well, especially Shelley (although he does come across as a little overdramatic at times, but that does fit with the story and the role) and the Doctor is excellent as the weak link in the group.

The two female characters are less impressive, but still do their jobs well. The horror in the film touches on the metaphysical as well as the psychological and even better does not rely on gore or shock to get the message across. There's a definite sense of dread as the film gets going.

The one reall off note for me was the music, for some of the scenes (such as the barn) it's a little unimaginitive and seems at odds with style of the film. Still that's not a major issue and overall this is an excellent horror film. 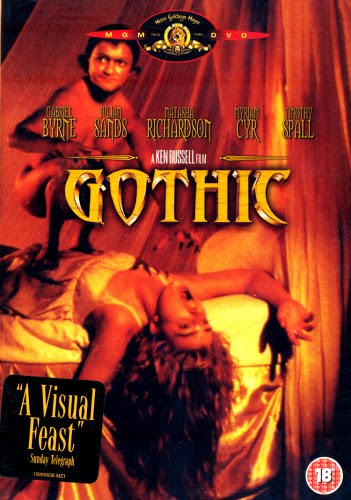 In 1816 the poets Byron and Shelley, Byron's doctor Polidori and Shelley's mistress Mary Godwin (later to become his wife) gathered in a villa on Lake Geneva and dared each other to write ghost stories. The results were Polidori's 'The Vampire' and Mary Shelley's 'Frankenstein'. In Ken Russell's recreation of that fateful night, the young Romantics hold a demonic seance and descend into a sex and opium-fuelled nightmare world.


Gothic is available from Amazon (and is an excellent horror film)
Posted by Michael Brookes at 12:35