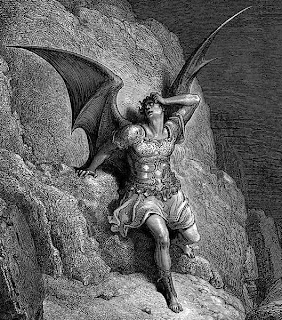 Lucifer’s pride sparked rebellion against God and by the Messiah’s might he was cast far from Heaven’s light. Renamed Satan he declared that to rule in Hell suited better than to serve in Heaven.

With envious eyes he watched creation and he beheld two beautiful creatures, clothed only in their innocence and bathed in God’s love.

In serpent form he sneaked into the garden and deceived the maiden, convincing Eve to eat the forbidden fruit. Loyal Adam’s despaired, yet still joined his wife in sin. From their fall we would wait for the Messiah’s return to restore a paradise lost.