The Omega Paradox is an interesting read, it blends science with belief and the occult in a way that kept me fascinated and entertained all the way through. It starts with a scientist's obsession with a series of acupunture prints from throughout history. This rather odd clue leads to a sequence of investigation that results in the discovery of a new species of human. This has rather significant for the rest of humanity and the world at large as you can imagine.

The story follows two main threads, the first is the discovery and revelation of the new human species and the second follows the work of a secret Nazi group working in opposition, with the two coming together for a dramatic finale.

For me the first thread was great, it's presented in a clear and understandable way (despite some of the science involved), it follows a well paced progression and really stands out The second thread unfortunately not so much, especially the early part of it. The secret nazi base and organisation has been done quite a bit and while it is well done weighs down the other more original thread.

Still it does improve throughout the book and does provide a suitable confrontation to conclude the story, but I cannot help but feel that the story might have been stronger without it and working on the wider context as the opposing force in the story.

Overall though the book hits the mark. It is well written and explores some interesting ideas. Well worth a read. 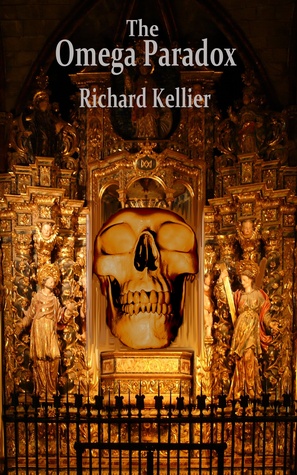 Something new walks the face of the Earth.

A scientific mystery on a collision course with occult and religious beliefs.

It all started as a mild preoccupation for geneticist Tim Leigh; then swiftly blossomed into a full blown obsession. Never a moment can go by without him being drawn to the series of framed prints on his office wall. As he stares at the images, the images stare back through dark inscrutable eyes. There they sit, little fat Buddhas, challenging him to solve the mystery behind their imperturbable gaze.

The images Tim gazed at in this daily mind-game were a series of ancient acupuncture charts; but behind their deceptive facade lay hidden a mystery that had survived down the ages. An ancient enigma waiting to be revealed.

Rachel Kardo had no idea what she was being roped into when she agreed to help a colleague investigate what he believed to be a hidden message within ancient medical charts. Before she knew it she was at the centre of the most extraordinary events in human history. Some say it is a New Beginning, some say it is the End of Days for humanity as we know it. Only one thing is certain; by whatever forces rule our fate it has been decreed that the time for a new beginning is now.

The ancient code is decrypted and the message reveals something deeply mystifying, unprecedented and bizarre. An event that will change everyone's lives – forever.

Now there is something new on the surface of the Earth; a thing more hotly argued over and disputed or accepted than any previously revealed scientific discovery. Whichever side of the argument you choose to adopt there is an opposing force that intends to destroy your belief system. Descendants of a Nazi Elite who have remained hidden while still engaged in their evil pursuits set out to destroy the promised new beginning.

Nazi scientists embark on a project to create a super-race. What they actually create is an abomination of the human form – a being inherently evil. It's Creator, Erica Wiligut, is the nemesis of all that is good - to some she will be seen as the Anti-Christ.

Events culminate in the ultimate battle between good and evil – played out at one of mankind's most sacred religious locations – and a revelation for all humanity.

Be warned: All is not what it seems.

Could the Second Coming of Jesus Christ be revealed in ancient code? Or is the Omega Man a new and evolved type of human.

MINDBLOWING:- I couldn't put it down! Can't wait for future books. Really makes you want to find out what's real, theory, or fiction. Very well written. No filler stories or background fluff. Don't mind missing a night of sleep for a book like this!

A CRACKING GOOD READ:- Loved this book, really original plot and I shall certainly be first in line for the second book by this author.

The Omega Paradox is available from Amazon (and is an interesting read)
Posted by Michael Brookes at 11:19