This was one of my favourite films as a youth, not only that, it also provided my introduction to Karl Orff's Carmina Burana (along with the Old Spice advert, but this is better). It's been many years since I last watched this and while it has aged somewhat it remains an excellent film to watch. It also has a number of known actors that I didn't really know about at the time who are now household names - watching Patrick Stewart strut his stuff in plate armour is as entertaining as it sounds :-)

It's an epic tale based on the Arthurian legend and a dam fine one at that. The story is filled with stand out characters and each are a joy to watch. Arthur starts as a bumbling squire who becomes a just king, Merlin (who's voice is great) is the sorcerer who tries unite the people with their land. Helen Mirren does a fantastic job as Morgana seeking revenge for the deception of her mother. The tale is dark one and the film shows this.

I mentioned that it has aged, this is most obvious with the special effects. There's also a theatrical and over dramatic feel that adds to the dated feeling, although I quite liked that. The music is great, the pacing is spot on and all in all I really enjoyed watching this again. 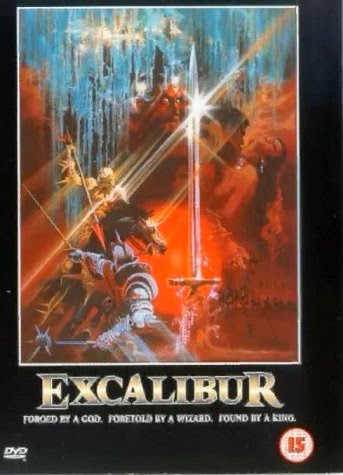 Raised by Merlin, young Arthur draws the mystical sword of Excalibur from the stone and becomes King. He grows to manhood and with his wife Guenevere and first knight Lancelot unites the country and founds the Knights of the Round Table. An epic battle between the knights of good and evil decides the fate of Camelot.


Click here to purchase Excalibur from Amazon (and it's a fantastic film)
Posted by Michael Brookes at 16:06