I almost didn't finish this book and that would have been a shame, the intro put me off a bit as it feels like a different story that the book evolved into. The set up is good, but the wolf pack attack seemed a bit cliched. Thankfully it developed quite quickly and I stuck with it and it became a lot more interesting.

The book is well written, and despite the bumpy start kept me reading. The pacing is a little slow, but that doesn't really harm the story. It's quite a contemplative book that hints at the purpose of the situation that characters find themselves in.

What I liked most is the mystery of what is going on, I would have liked to have learned more about the set up though. I did look for the next book in the series, unfortunately it's not out yet. I'll be keeping my eyes open for it though. 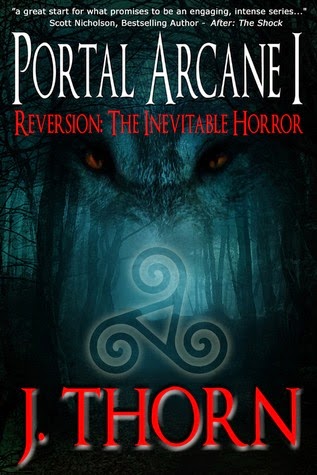 With a noose around his neck, Samuel arrives in a forest littered with caution tape and artifacts of the deceased. He struggles to regain his memory while fending off a pack of wolves and the mysterious visitors who seem to know more about this dying world than he does. Major, Kole, and Mara, new companions also trapped in the strange locality, realize they must outrun the ominous cloud eating away at reality. As their world collapses upon itself, Samuel must find a way to escape the Reversion.

Click here to purchase Reversion: The Inevitable Horror from Amazon (it's a decent read)
Posted by Michael Brookes at 10:30