There's a name change to the Wednesday Blog feature, it will now be called Blog Shout Out, which is a bit clearer I'm sure you'll agree! This week we feature Dianne Harmen's blog, you can read all about it in her own words below.

If you have a blog that you would like featured then drop me a line and I'll take a look. 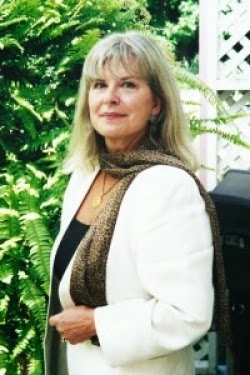 I started the website and blog about a year and a half ago. A mentor of mine told me that if I was going to be an author, I needed to have a website and blog, and so I began. While the majority of my blogs deal with the process of writing, marketing, and producing book, I also put the articles that I write for Huffington Post on it as well. I’ve found people really enjoy a break from the novel!

Below are two articles that recently appeared on my blog. One deals with book covers and the other with the miracle of hummingbirds which was recently in the Huffington Post.

It still amazes me that I’m an author of four published books because it all just happened. My husband and I were at a boutique hotel in Palm Springs, California for a wedding 2 ½ years ago. It was 107 degrees outside and the air-conditioning felt wonderful! Where it came from I’ll never know, but out of the blue I turned to my husband and said, wouldn’t it be interesting if someone put a feel-good drug in the air-conditioning and everyone felt good all the time. He looked at me and said, “There’s your book..” And Blue Coyote Motel was birthed, followed by Coyote in Provence.

At the time my husband was a California Senator and so Tea Party Teddy and Tea Party Teddy’s Legacy soon followed. I’ll be publishing Cornered Coyote within a few weeks and Dinner Party Diva and the Red Cedar Spa will follow that. I’ve never had so much fun!!! When knew at this stage of my life there would be a whole new career opening up? Not me!

A LEAP OF FAITH!

They’re Leaving the Nest — A Leap of Faith

Who doesn’t love springtime? No matter what our age, we feel a sense of renewal. The trees are heavy with fruit, the wisteria is brilliant on the patio, the garden is a riot of color, the butterflies are on the milkweed and the hummingbirds have laid their eggs.

Therein is the problem. This year, we have two hummingbird nests, one directly outside my office window on the second floor and one just beyond the side patio on the first floor. The nests are a work of art and the comings and goings of the mommas distract me when I should be writing, but how many times do you have a front row seat to watch a miracle taking place right in front of you?

I’ve been very concerned about one of the hummingbird mommas. I think I’m witnessing a bad hummingbird mother and I don’t think there’s a 12-step group for help or a place I can report her. I’ve never heard of the “Bad Hummingbird Mothers Self-Help Group!”

The silken nest outside my office window was the home a year ago for two eggs which later hatched and became beautiful hummingbirds. I watched by the hour as momma gathered nectar and fed her babies. I watched them grow and held my breath the first time they flapped their tiny little wings. I freely admit it; I cried when they left. I can only imagine what the world must look like to a baby hummingbird perched on the edge of its nest, read to spread its wings for its first flight. That momma watched them as they took their first tentative flight and then flew to where they were. Talk about a leap of faith! I wonder if momma hummingbird felt like I did, that those babies were just too young to be out in the world on their own.

I was surprised when I looked out the window about a month ago and noticed there were two perfect little hummingbird eggs in last year’s nest. I thought hummingbirds always constructed new nests each year, but when I went to the Internet — and who doesn’t go there when information is needed? — it said in some cases, the momma or her babies may return to the nest from the year before to lay their eggs. Who knew? However, this year I became concerned because I never saw momma on the nest. I know she had to be there or they wouldn’t have hatched. No doubt about it, momma from last year was a much better mother. I never saw this year’s momma feed her birds, but I know she had to or they wouldn’t have been able to fly away. And I was there when they flew away, she wasn’t.

The nest near our patio is a little more difficult to see because I have to look up, not out, to see it. That nest’s momma is a good one. Every time I’ve been there she’s been on the nest. While I can’t see directly into it without getting a ladder and I’m afraid it might disturb her, enough time has gone by that the eggs should be hatching any day now. The other afternoon, I took a friend out to see the nest and momma hummingbird was on the nest as usual. Momma always stays on the nest when just one person is under it, but this time she flew to an upper branch and sat, watching us. I feel certain she was protecting her soon-to-be babies. She’s a good momma.

I’d like to think we mommas of all species share something in common: We watch out for our hatchlings. I worried when our children first drove. Now I wonder if momma hummingbird worries when her babies are flying around. You know I’ll be eagerly looking out my office window next year to see if any of them return to the nest to lay their eggs. I hope it’s a good momma. I’m pretty disappointed with this year’s upstairs momma.

Ahh nature. What a miracle!


BOOK COVERS – ARE YOU GOING FOR ART OR SALES?

I’ve read and been told that the cover of a book is critical to the success of the book. I’ve always agreed with the statement. Where I erred was not making the distinction between aesthetics and marketing. I published Coyote in Provence several months ago and I loved the cover the graphic artist did. I thought it was beautiful and I still do. What I didn’t take into account was that it really said nothing about what was in the book.


The book did fine, but not what I thought it could do. Overall, the reviews were excellent and when I did a special promotion, it always sold well, but something was niggling at me. I decided maybe it needed another cover. Bingo! The man who did the cover captured the essence of the book. And here’s the interesting part. I took out an ad on Goodreads months ago. I switched my ad from Blue Coyote Motel to Coyote in Provence. Within one week I’ve received more clicks on Goodreads than I had the entire last few months. Plus, I’ve received several great reviews since it went up. Here’s one  as well as both the before and after covers.