It's been many years since I last watched this film and as with any film watched a long time ago with fond memories there's always the slight trepidation that it doesn't hold up to watching with older eyes (if not an older brain!). I needn't have worried though, while the film does show its age in many ways it's still great fun to watch.

Kurt Russel plays Jack Burton, a wise cracking truck driver who's friend's fiance is kidnapped, he agrees to help try and get her back from the gang who took her. Unfortunately he's up against more than just a gang of thugs and faces against an ancient Chinese evil.

It's a silly film, ok a very silly film. The story is over the top and so is Jack Burton, he plays a traditional tough truck driver and that makes a nice contrast to the supernatural and martial arts experts around him. While the support all do their jobs well Burton is very much the star of the show, he balances the action and the humour superbly.

For me Big Trouble is the proof that sometimes things are as good as you remember them and this remains an excellent comedy action film. 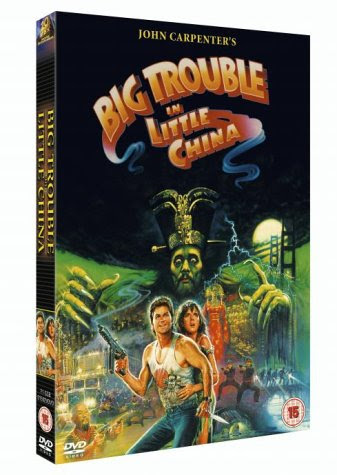 When his friend's fiancée is kidnapped, truck driver Jack Burton (Kurt Russell) embarks upon an unlikely adventure beneath the streets of San Francisco's Chinatown. It seems that the fiancée, green-eyed Gracie Law (Kim Cattrall), has been taken by 2,000-year-old wizard Lo Pan (James Hong), who needs to marry a woman with green eyes if he is to regain his physical form. With guns at the ready, Jack storms into the Chinatown underworld ready to rescue Gracie from Lo Pan's clutches, but with the supernatural and martial arts forces that are ranged against him, it's a task that is going to be anything but easy.

Posted by Michael Brookes at 21:21