A week or so ago I posted my review for Beyond 100 Drabbles by Jonathan Hill and Kath Middleton (you can read that review here), if that review wasn't enough for you to download this wonderful collection of drabbles then how about a little taste of what is there? Below is today's tease in the form of some drabbles from this book: 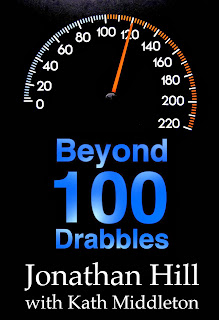 
The sun was strong and Julian barely had the energy left to wipe the sweat from his brow. He had never felt so weak. He needed food and water. And fast.


But there was hope, for he could see land. If only he could summon up the energy to navigate the choppy waters and clamber ashore.


A further half hour passed, the boat drifting closer to dry land without any input from Julian, who was moments away from collapse.


Finally, his boat hit something solid and, panting, he staggered onto the jetty.


Never again would he go on a pedalo!


Writing is such a powerful medium, I think, as I finish another word with satisfaction. It can transport the most unimaginative mind to fantastical faraway places. It can communicate the most complex of emotions. It has the power to make you feel less lonely when you see characters experiencing feelings that you thought were unique to you. A few carefully chosen words can paint an entire canvas in your mind. Me, I like to use words to move people too. I paste down a ‘W’ from a Guardian headline. My writing is complete. ‘pAy UP oR You Won’T SEe TOMoRroW’


Dave had been having an affair for months. Anne knew but she was in denial. There were just too many late nights at the office and he’d never before had to attend so many weekend conferences.


Finally, Anne confronted him about it while preparing dinner, and he admitted it.


“You’ve let yourself go,” he said. “It’s your own fault. You’re boring and frumpy these days. You’re just not exciting any more, not like her. You should have seen it coming.”


She turned from chopping vegetables for dinner, the knife still wet in her hand.


He should have seen it coming.


“I spy with my little eye something beginning with…”


Daddy made a show of looking all round the room.


“Man?” Daddy asked, pointing at his own chest.


Oscar frowned and shook his head.


Daddy turned to see the door swinging shut of its own accord. Mummy had been dead two months now.


The eleven year olds of Woodstock Primary were well into their Thanksgiving production of the musical, Oklahoma! The hall was packed with proud parents, teachers and fellow pupils. The children looked adorable in their costumes and audience members frequently cooed, applauded and cheered. Each and every child performed radiating happiness. But if people had looked closer, they might have noticed that little Tommy’s smile was only skin-deep. In that boy’s cute holster wasn’t the plastic gun he had practised with in rehearsal, but the pistol he had taken from his daddy’s cellar. Fourteen wouldn’t leave the hall alive that night.


Sarah was carrying her pot to the baker’s shop. For a copper coin he would put it in with the loaves and she knew that the big bread oven would make the stew really tender. She hadn’t gone more than a few steps from her own front door when she smelled burning. Flames leapt from building to building ahead of her, crossing the narrow streets where the upper floors almost touched. The crackle became a mighty roar and her path ahead was completely blocked with fire. She turned in horror and fled as far from Pudding Lane as she could.