Film Review - The Good, The Bad and The Ugly

I've had a fun day watching the Dollars trilogy and this is my favourite of the three films (although I could argue that A Few Dollars More is a better film) and in fact is one of my favourite films of all time. In scale it's more epic than the previous two, its essentially a treasure quest, $200,000 in gold lost during the American Civil War.

The film works primarily because of the three leads, Blondie (Clint) is the Good, Angel Eyes (Lee van Cleef) is the bad and Tuco (Eli Wallach) is the ugly. The three of them live up to their monikers, but more importantly the three share each others traits to differing degrees as you discover through the film.

In some ways it reminds me of Apocalypse Now (another excellent film) in the sense that at first glance it appears like a series of excellent set pieces strung together. However this film is more cohesive in how those set pieces fit together and it is during those set pieces that the characters reveal their less obvious traits.

Once again the soundtrack is excellent and fills the epic scale of the film, the title track in particular really stands out. It's quite a long film, but it's filled with goodness and it's a simple joy just watch the three leads in action. A great film that truly deserves its classic status. 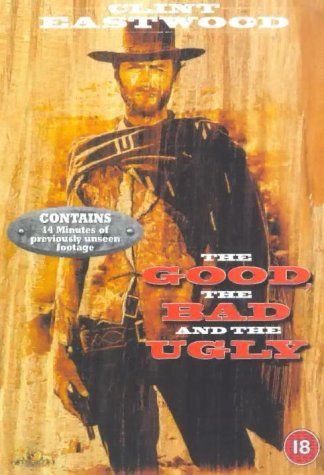 Clint Eastwood ("the Man with No Name") is good, Lee Van Cleef (named Angel Eyes Sentenza here) is bad, and Eli Wallach (Tuco Benedito Pacifico Juan Maria Ramirez) is ugly in the final chapter of Sergio Leone's trilogy of spaghetti Westerns (the first two were A Fistful of Dollars and For a Few Dollars More). In this sweeping film, the characters form treacherous alliances in a ruthless quest for Confederate gold. Leone is sometimes underrated as a director, but the excellent resolution on this DVD should enhance appreciation of his considerable photographic talent and gorgeous widescreen compositions. Ennio Morricone's jokey score is justifiably famous. The DVD includes about a quarter-hour of footage not seen in the original release.

The Good, The Bad and The Ugly is available from Amazon (and is one of the finest westerns ever made!)

Posted by Michael Brookes at 17:51