This is a fun sci-fi watch, it's set in 2154 and the world is polluted and over populated, but for the more fortunate there is the Elysium space station which is a technological utopia. People on Earth are constantly trying to gain access to the orbital, but are dealt with harshly (although why the station has no defences of its own seems a bit odd).

Max (Matt Damon) is an ex-con who is poisoned in an industrial accident and his only chance is to be healed in a med bay only available on Elysium.He teams up with a resistance movement to gain access to the station. Meanwhile up on the station a plot is unfolding and Max finds himself caught in the middle and hunted by one of her agents (who is a pretty nasty bad guy).

For me the opening shots of Elysium were the high point of the film, they look lovely and there needs to be more of this type of thing in films (check out Cargo for something similar). From that point it's a blend of action and light political intrigue (Jodie Foster does a good job as the cold minister with her own plans for the station).

It's all fairly predictable but still manages enough to be an entertaining watch. Some of the effects were pretty cool (the air burst ammunition stood out) and everyone fills there roles well. It's also well filmed with some nice shots, but I have to say that District 9 was a better so if you haven't seen that then you should watch that first, if you have then give this a go, it's a fun watch, but not great. 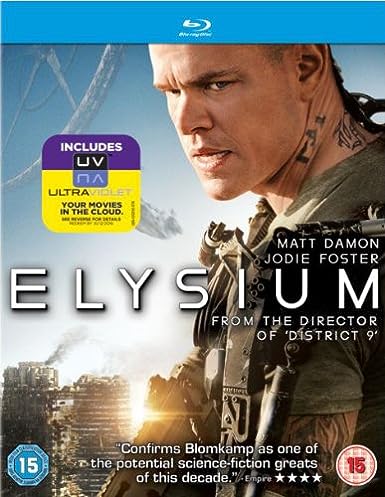 Neill Blomkamp writes and directs this sci-fi drama starring Matt Damon and Jodie Foster. It is the year 2154 and the wealthy have fled the overpopulated and largely resource-drained Earth in favour of Elysium, a luxurious space habitat located in the planet's orbit. With no poverty, no sickness and no war, the contrast between Elysium and the ravaged planet it revolves around couldn't be starker - and is tough for those left on Earth to bear. When Max De Costa (Damon) learns that he has no hope of beating the cancer that has afflicted him without breaking into Elysium, he understands the scale of the task he has undertaken. With Secretary Delacourt (Foster) charged with enforcing Elysium's strict anti-immigration policies and a team of hardened troops at her disposal, led by the ferocious Agent Kruger (Sharlto Copley), Max faces the battle of his life if he intends to bridge the cosmic gap between rich and poor.

Elysium is available from Amazon (and is a fun watch)