In this latest Tuesday Tease we feature and exert from 'Wendy Won't Go', by Amanda Lyons: 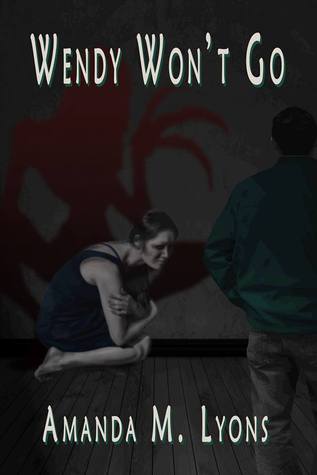 
Billy sipped the last of his coffee from the mug and shut down his laptop. 1,000 words wasn’t great but it also wasn’t as bad as no words at all. It hadn’t exactly been a great couple of years, and the royalties from his first few books were only going to hold out so much longer. Even if he didn’t have anything else to worry about, there was always Sara to consider. Sara with her big, blue eyes so like her mother’s.

He sat for a moment longer thinking about his daughter and all they’d been through since Wendy had passed. Then he picked up his mug with a long sigh and carried it to the kitchen to rinse it in the sink.

When he came back into his little living room and the quiet of 1 AM, he wasn’t surprised to find her there, over to the side of the bookshelf hovering close to the floor, just beyond the couch.

Her eyes were cold and intense in death, angry and spiteful in a way he’d never seen them when she was alive. What once had been beautiful was now a horror and a threat, one that he’d known far too well in the years since she’d died. He and Sara both.

He stood where he was, looking at her as she glared up at him. Part of her lower perspective was caused by kneeling next to the shelf, but he knew from the many times she’d walked or run through a room that death had also reduced her, made her no higher than four or four and half feet when she’d been six in life. She was like a child, trapped there on the cusp between youth and coming adulthood. Crushed and broken down into a husk, an entity with no more love for them than a snake.

Familiar tears stung his eyes, but he blinked them away, letting his anger and frustration rise in place of his grief.

“Fuck you! What right do you have to be here? Why won’t you let Sara and I be? We loved you! We still love you!”

She didn’t respond; she never does. It’s as if she used up all of her words before she died, and now all that’s left is the pain and the anger of her death. The empty lack of true life in her eyes leaves him cold. He doesn’t say anything else to her. It’s all a waste and he knows it. She frightens him as much as she makes him angry. Spite lives in every corner of her body, and he’s reached his limit on how long he can see this perversion, this nightmare of what once meant so much to him.

He walks past the bookshelf and through the doorway. He and Sara’s rooms are up above. With an effort he resists the urge to look back down the hall to see if she has followed. He refuses to treat his wife like a boogeyman no matter how much she has come to fit that mold. He can feel her eyes burning into him from somewhere back at the edge of the living room. The sensation leaves a cold trail of fear up his back as he walks the last four feet to the stairs and then up. He can hear her feet rush across the floor behind him and the rustle of fabric as she darts up the stairs after him. His pulse and his feet speed up as she grows closer, but he’s never as fast as she is.

Soon she slips up the steps under his foot, shoving him aside as she crawls on her hands and feet through his legs and up the last few stairs above. As she passes through his legs, her presence never more clear than when it’s shoving right against him, he smells the clean and medicinal smells of the operating room and the cloying stench of blood. For a moment he’s back in that room with her, listening to her grunt and keen as she works so hard at pushing Sara into the world, and then he’s back looking up at her as she slowly considers the landing and where to go from there.

His voice is a whisper, one that pleads. “Wendy?”

She looks back at him, rolling her hips so that she can turn and give him her full attention. Here in the dark, where the pale white skin of her body and the thin flat area of her hips grow more shadowed, everything about her seems long dead, all but for her eyes, flaming in sunken sockets. Fire blue and angry. She considers him for that moment and then hisses in annoyance as she charges on hands and feet across the landing, and into Sara’s room.

Fear once again rises up his spine and down into the pit of his stomach and he charges up the last few steps to chase after her, into the dark room where Sara is asleep. Her door stands open, and for what seems like the thousandth time he runs into her room to see what Wendy has done.

A longtime fan of horror and fantasy Ms. Lyons writes character driven novels that while influenced by her darker interests, can also be heavily laced with fantasy, romance, history and magic. Amanda M. Lyons has lived her whole life in rural Ohio where she lives with her fiance and two children. Eyes Like Blue Fire is her first novel.Wendy Won't Go, a novelette is forthcoming from J. Ellington Ashton Press and she's currently at work on Apocrypha a short horror collection with Robert Edward Lyons II.

Posted by Michael Brookes at 09:21