Welcome to the start of a new feature here on The Cult of Me. Poetry is a form of writing that I have sadly neglected over the years. I've read many of classics, indeed John Milton's 'Paradise Lost' is my favourite story ever written. So in an attempt to remedy this I am starting the Friday Poem feature.

Each week I post an excerpt either from a poem I have enjoyed, or has been provided by another writer. I know there are more than a few poets that follow my blog so this is an opportunity for you to show off your work! If you want to get involved then just drop me a line and we can take it from there.

For those of you curious why I love 'Paradise Lost' so much take a look at my post here: 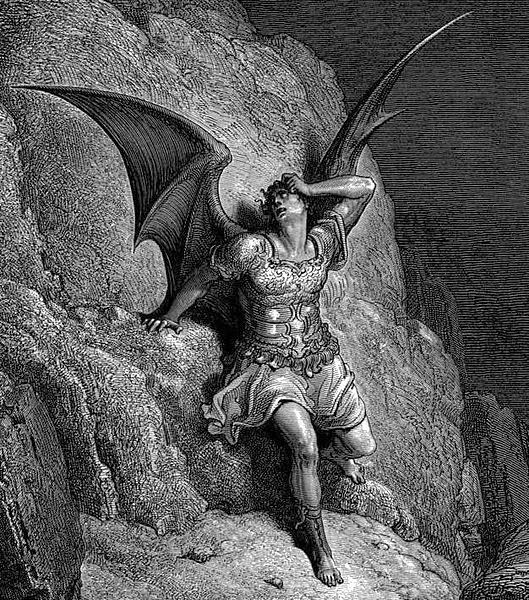 Of Mans First Disobedience, and the Fruit
Of that Forbidden Tree, whose mortal tast
Brought Death into the World, and all our woe,
With loss of EDEN, till one greater Man
Restore us, and regain the blissful Seat,
Sing Heav'nly Muse, that on the secret top
Of OREB, or of SINAI, didst inspire
That Shepherd, who first taught the chosen Seed,
In the Beginning how the Heav'ns and Earth
Rose out of CHAOS: Or if SION Hill
Delight thee more, and SILOA'S Brook that flow'd
Fast by the Oracle of God; I thence
Invoke thy aid to my adventrous Song,
That with no middle flight intends to soar
Above th' AONIAN Mount, while it pursues
Things unattempted yet in Prose or Rhime.
And chiefly Thou O Spirit, that dost prefer
Before all Temples th' upright heart and pure,
Instruct me, for Thou know'st; Thou from the first
Wast present, and with mighty wings outspread
Dove-like satst brooding on the vast Abyss
And mad'st it pregnant: What in me is dark
Illumine, what is low raise and support;
That to the highth of this great Argument
I may assert th' Eternal Providence,
And justifie the wayes of God to men.


Say first, for Heav'n hides nothing from thy view
Nor the deep Tract of Hell, say first what cause
Mov'd our Grand Parents in that happy State,
Favour'd of Heav'n so highly, to fall off
From their Creator, and transgress his Will
For one restraint, Lords of the World besides?
Who first seduc'd them to that fowl revolt?
Th' infernal Serpent; he it was, whose guile
Stird up with Envy and Revenge, deceiv'd
The Mother of Mankinde, what time his Pride
Had cast him out from Heav'n, with all his Host
Of Rebel Angels, by whose aid aspiring
To set himself in Glory above his Peers,
He trusted to have equal'd the most High,
If he oppos'd; and with ambitious aim
Against the Throne and Monarchy of God
Rais'd impious War in Heav'n and Battel proud
With vain attempt. Him the Almighty Power
Hurld headlong flaming from th' Ethereal Skie
With hideous ruine and combustion down
To bottomless perdition, there to dwell
In Adamantine Chains and penal Fire,
Who durst defie th' Omnipotent to Arms.
Nine times the Space that measures Day and Night
To mortal men, he with his horrid crew
Lay vanquisht, rowling in the fiery Gulfe
Confounded though immortal: But his doom
Reserv'd him to more wrath; for now the thought
Both of lost happiness and lasting pain
Torments him; round he throws his baleful eyes
That witness'd huge affliction and dismay
Mixt with obdurate pride and stedfast hate:
At once as far as Angels kenn he views
The dismal Situation waste and wilde,
A Dungeon horrible, on all sides round
As one great Furnace flam'd, yet from those flames
No light, but rather darkness visible
Serv'd only to discover sights of woe,
Regions of sorrow, doleful shades, where peace
And rest can never dwell, hope never comes
That comes to all; but torture without end
Still urges, and a fiery Deluge, fed
With ever-burning Sulphur unconsum'd:
Such place Eternal Justice had prepar'd
For those rebellious, here their Prison ordain'd
In utter darkness, and their portion set
As far remov'd from God and light of Heav'n
As from the Center thrice to th' utmost Pole.
O how unlike the place from whence they fell!
There the companions of his fall, o'rewhelm'd
With Floods and Whirlwinds of tempestuous fire,
He soon discerns, and weltring by his side
One next himself in power, and next in crime,
Long after known in PALESTINE, and nam'd
BEELZEBUB. To whom th' Arch-Enemy,
And thence in Heav'n call'd Satan, with bold words
Breaking the horrid silence thus began.

This extract from John Milton's 'Paradise Lost' is taken from the Gutenberg Library, you can find the full text here: http://www.gutenberg.org/cache/epub/20/pg20.html
Posted by Michael Brookes at 13:31