There's only two days left until the Sun Dragon virtual launch party! Exciting times. I've received the proofs for the paperback and the few tweaks needed are done - so this should be ready in the next few weeks. The Kindle version will be released tomorrow and as little tease here's the second chapter: 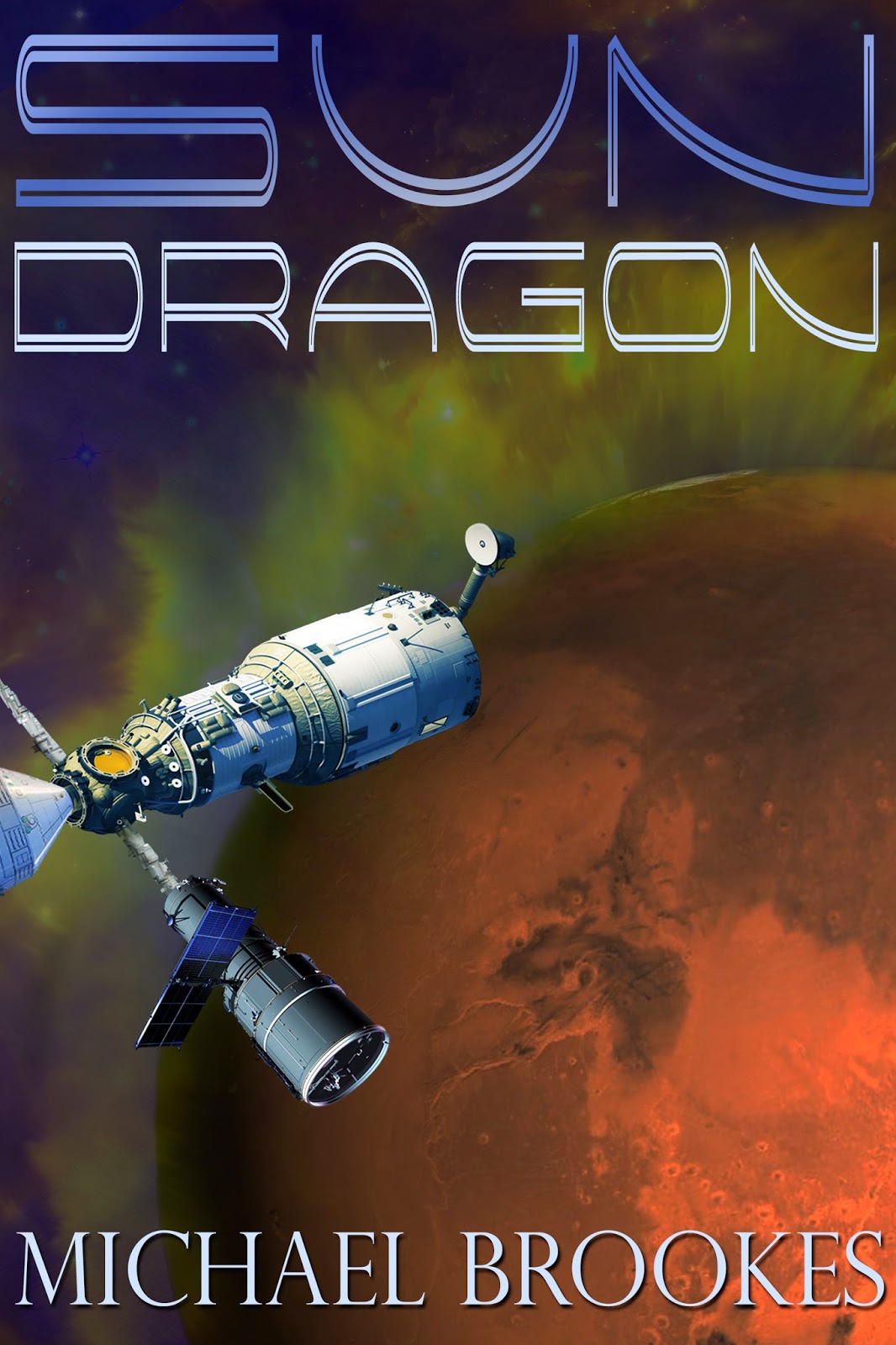 The International Space Station’s crew pulled out all the stops for the Mars mission crew’s last meal in Earth orbit. It would be three years before they returned to Earth.

The ten astronauts squashed into the same module that the crew would be bunked in for that night. This was one of the new modules that they’d added to the station to accommodate the construction crew and was a little larger than the station’s older modules.

Without realising it, everyone steered the conversation clear of the subject on everyone’s minds – the mission to Mars. The reasons for doing so were complex. In part there was more than a little jealousy at the crew heading farther than any astronaut had ever gone before.

There was also an element of superstition. Like actors not mentioning the ‘Scottish Play’, they kept the talk clear of the impending mission. Instead they told anecdotes from their training, as despite their different nationalities they shared that common bond.

“It was the flight training that worried me the most,” Professor MacQuire told the eating crews. The Mars mission was unusual in that every crew member had to be flight qualified. For all space missions, skill redundancy formed standard procedure, but for the crew being so far away from Earth, the mission planners had determined that everyone should be able to fill any other team member’s role in case of an emergency.

“It wasn’t the flying. I’ve always loved flying. I wouldn’t be here if I didn’t. Right?” A few grins of agreement from the others in the module. “No, my real worry was flying the plane. It took me ages to pass my driving test in my younger days. I had a terrible time. I imagined this would be the same. Thanks to Colette here,” he smiled at her, “I soon mastered the basics.”

Despite their national rivalries, the Englishman and the French woman had formed a quick friendship. They made an odd pair. At first glance he appeared the stereotypical bumbling professor. However, his intelligence matched his quick wit and fit physique. ‘Long walks in Welsh hills,’ he claimed with his usual self-deprecation.

He was also a prankster and had caught out Samantha, who hated practical jokes, a few times during training. He’d promised there would be none on the voyage, but no-one believed him.

As well as co-pilot, Colette was the crew’s medical doctor. She’d started her career as a pilot in the French Air Force. After giving up flying following a year-long deployment in French Guiana, she had trained to become a doctor. Colette had then stayed with the Air Force until joining the European Space Agency six years ago.

“For me it was the neutral buoyancy training.” Juliet Jakes entered the conversation. “I’d scuba qualified years ago, too many years ago. I love being in the water. But being in the water wearing that big old suit. Well, that was something different.”

The conversation flowed along with the tubes of food. At least on the ship they’d have some gravity, well, spin to be accurate, but it was almost the same thing. They’d at least be able to eat food in a somewhat civilised fashion.

As Ronald started telling an anecdote from his time with the Army Corp of Engineers, Samantha excused herself from the table. She headed to the Tranquillity module, intending to use the latrine. The cupola at the far end caught her eye. The segmented window enabled the ISS crew to observe Earth and provide a view when controlling the station’s robotic arm.

More than a few astronauts had made the view famous with their antics over the years. It was a glorious view of the Earth that kept the public and the astronauts entranced. Below her, Africa flowed towards the dawn. It was dark under the night sky except for a few cities which stood out with their glow in the shadow. She twisted her head to see if she could view the Mars Voyager vessel.

Everyone agreed that it was a silly name, but of all the negotiations this had proved to be the stickiest. A delicate multifaceted negotiation that had dragged out between several national space agencies and the three major space corporations involved in the mission.

Many industry commentators considered this mission to be the first step of the commercialisation of space. Samantha smiled at that thought. The commercialisation of space had started decades before, although in recent years private launch vehicles became busier that the national space agencies. That had been a tipping point and it hurt the pride of some of the nationalities in the programme.

Samantha found what she was looking for. A large cross shape, almost obscured by the space station’s shadow. This ship would be their home for the next three years. The modules had required nine launches to put them into orbit. They included three European Space Agency Arianne 5s, two Russian Protons and four launches from Chimera Industries’s own rockets.

At the ship’s base was the first stage, comprised of three twelve-metre-tall fuel tanks that would power the vessel out of Earth orbit into its transfer trajectory. As well as providing thrust, the bimodal nuclear engines had a low-power mode to generate electricity for the ship and crew throughout the extended journey.

Above the first stage she saw the second stage. Smaller than the first, it would push the ship into the right orbit to rendezvous with Mars in ten months time.

The top of the cross comprised of two more modules. At the very top, with its single engine pointing into the sky, was the hanger module. Inside the hanger were two landers, which would take them to the surface of Mars and back into orbit. Below that was the Mars science observatory. This module would remain in orbit around Mars, acting as a base for the landing mission, but also for any future missions to Mars.

The two arms of the cross came from thin tubes which connected the two modules, one on each end. At a diameter of seventy metres, the arms would be spun at a fraction under four revolutions per minute. The spin would produce an effect almost the same as gravity, although to about a third equivalent of Earth gravity. This approximated the gravity they’d experience once on the surface of Mars.

One of the biggest dangers to human beings when living for extended periods in space was bone and muscle loss. This was especially true in zero gravity. The fake gravity created by the spin along with a specially designed exercise programme would aid in preventing that problem. An experimental drug treatment had also been developed, although everyone hoped that it wouldn’t be needed.

On the left arm was the habitation module. All six of the crew would live in that space. It would also act as their return craft, bringing them back home when the mission was completed. The other arm comprised the Mars science laboratory. The long trip provided an opportunity for a lot of experiments, both along the way and while they were in orbit.

A hand upon her shoulder startled Samantha from her thoughts. She glanced over the gnarled hand and saw Piotr’s smiling face. He wasn’t alone, the whole crew had joined her. They knew what she was looking at. Each of their faces also wore the same excited expressions as she felt in her heart.

The ISS crew floated in the background, they wanted to share the moment but knew that it wasn’t theirs and kept out of the way. Everyone who dreamed of going into space dreamed of going to Mars. This was the ultimate journey. And in just over a day’s time, they would be heading there.

Sun Dragon will be released on Friday October 31st and can be pre-ordered here: