There aren't many authors whose latest releases push their way to the front of my TBR list, but Neal Asher is one of them. He's one of my favourite contemporary science fiction authors, and I'm always eager to read his latest offering. The main reason for this isn't just the craft of his writing (good as it is), but the strength of his world building. The Polity universe is an interesting, and diverse place. There is a wealth of technological wonders there, but also a balance.

Although the balance isn't so obvious with some of the characters, especially with the rogue AI Penny Royal who manipulates circumstances, AI, human and Prador alike to its on ends. It is there though, resting upon the fine edge which events waver.

I didn't like one aspect to the technology - I'm not a big fan of time travel in stories. The handling in this book is different to the approaches I've seen before, and used in a novel fashion.

The story continues straight from the first book, with Penny Royal seemingly plotting to address problems for the Prador and the Polity that he created. These all centre around the War Factory, and it's this character that I found most fascinating. Even more so because its never dealt with directly in the story, you learn aboiut it through the memories and actions of the central characters. The AIs in the universe often seem like god-like beings with staggering intelligence. They have their flaws though, and that makes the story compelling.

The cast of characters continue from the first, and so continue to evolve due to their own actions and from Penny Royal's machinations. We get to meet the Prador King, and that is another of the author's strengths. He provides a convincing realism to the aliens in his story, in particular with their biology. Their motivations aren't quite so distinct, although maybe that says something about the universality of life's desires.

Another new character, that appears is a forensic AI, and here we have a glimpse of what Penny Royal will face in the next book. I can't wait! 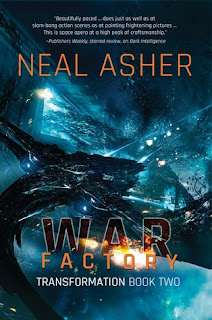 Thorvald Spear, resurrected from his death over a hundred years earlier, continues to hunt Penny Royal, the rogue AI and dangerous war criminal on the run from Polity forces. Beyond the Graveyard, a lawless and deadly area in deep space, Spear follows the trail of several enemy Prador, the crab-like alien species with a violent history of conflict with humanity.

Posted by Michael Brookes at 11:10