I was a bit disappointed with this book, in part because it's actually a short story and not a longer piece that I'd expected from the blurb. Which will teach me not to check the number of pages first. Not that I don't enjoy short stories, and indeed, I was quickly drawn into the world portrayed.

It's very well written, and the seemingly sedate entry with the family waiting in line to be sent to Paradise really drew me in. It worked well to get to know the family and also establish the circumstances of this near future world. There's definitely something sinister at play, this becomes apparent through the characters beyond the family, but also with a lovely throw away line from the mother.

All too quickly the story ended, which was a big shame as I'd enjoyed the build-up so far, and then encountered my biggest problem with the story - it just ends. No matter how short the story there should be a conclusion. There isn't one here, it reads like the opening chapters of a longer book, which apparently is in the works, but not available yet.

As the opening of a longer story it works well, so much so that I'm looking forward to it, but as a stand alone short story it is sadly lacking. 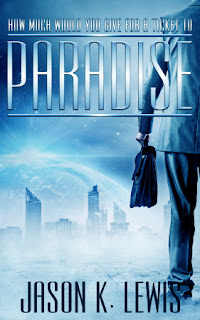 How much would you give for a ticket to Paradise? How much would you give for the chance to start anew, without the stresses and strains of modern life?
John Carlton and his family just won the trip of a lifetime and they can't wait to get started in the brave new world that awaits them.
Simon Swanson wishes he had a ticket. He dreams of walking on fine coral beaches with the sun burning overhead, but for now he watches, happy that some, at least, have the hope of a good life.
Michael Judd is going to save the world and he won't let anything stop him.
Five lives intertwine in a tale of hope, redemption and salvation on the journey to Paradise.

"...leaves you on the edge of a thread, dangling, really wanting more..."

"...Lewis has a knack for quickly developing characters through their behaviours...complexities are expressed with power and subtlety..."