I found this book a bit of a mixed bag. It starts well with a trio of cannibal clowns, but loses it's way a bit. The scene is set well with a failing troupe of circus performers who have the fortune to meet a charismatic man who turns their fortunes around. Quite naturally things are not what they seem and this man interferes in their lives in a dramatic fashion. It's here that the book needed more work. This character should have felt more sinister than it did, and indeed to an extent this issues covers the whole story.

The elements are certainly there, and there are some intense horror moments, but they are an exception. These tended to be more limited to the more physical shock horror, but the story cried out for something more insidious. I feel that it needed more of an undercurrent to make the shocking moments a bit more fitting.

There's an interesting array of characters, but apart from a few exceptions they lacked depth, and some more development with them would have helped strengthen the plot. In some ways the number on offer fights against some of the more personal conflicts at play.

The biggest issues for me were the reveals. First you learn the secrets of two of the main characters, and they come out of the blue and make a big claims. To be honest they felt a little forced, and would have enjoyed greater impact as acts in themselves, rather than trying to force them to certain historical events.

Beyond this was the end reveal, and a change in circumstances. Again it felt too much, and wasn't really needed. With some more development the circus itself had all the horror the story needed, and the ramp up at the end could have been something more meaningful. That being said I did enjoy the choice at the end, although it didn't really fit with the characters behaviour throughout the book.

It's true that I had issues with the story, but the writing was solid, and it's a fast paced read. It has some bizarre moments, and I did enjoy it overall. Worth a look if you're searching for something a bit different. I should warn you that it's not for the squamish! 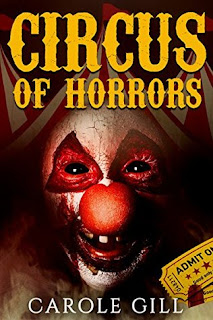 WARNING: THIS IS A DISTURBING TALE! IT IS FOR FANS OF BIZARRE, ADULT HORROR. THERE IS GRAPHIC VIOLENCE, STRONG, LANGUAGE AND SEXUAL SCENES *************
What exactly is wrong with this circus? There are demonic, flesh-eating clowns, murderous midgets, there is a fat lady with some peculiar tastes (to put it mildly) and there is an old man with one hell of a secret. Old Pa keeps a trunk with some very special souvenirs. When a stranger joins up who has second sight (among other talents) the old man's son gets nervous.
There are a lot of very strange beings not to mention a succubus or two and some beings from hell.

Click here to buy Circus of Horrors from Amazon