This is the fourth book in The Long Earth series, and while the individual books aren't the greatest, I do love the series. The strength of all the books is the deceptively easy way they cover complex concepts by rolling them into a compelling narrative, with a diverse range of characters. Even with the fourth book in the series the authors manage to keep the core premise fresh.

After The Long Mars I was curious as to where they would take the story next, and this book takes it into a familiar direction with aliens. Naturally it's not quite so simple as that, and there's a considerable build-up to the main event. And here we encounter one of the downsides to the story. As with the earlier books the finale feels rushed compared to what preceded it. In all cases the ending is fitting, but just too abrupt.

The story covers how mankind adapts to the events on Earth and the expansion of humanity into the Long Earth. It also delves into some of the history of the talent, although this aspect feels more of a distraction to the more significant events at play.

Another weakness is reflected in its greatest strength. There's some great ideas here, but they're not really developed as deeply as they could be. For me, this and the forced pacing are the biggest problems with the book, but despite these issues it is an enjoyable read, and I'm looking forward the the release of the next one in the series. 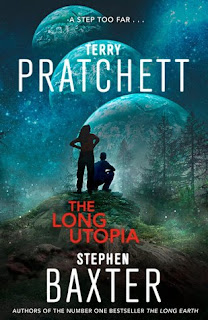 It is the middle of the twenty-first century.

After the cataclysmic upheavals of Step Day and the Yellowstone eruption, humanity is spreading farther into the Long Earth. Society, on a battered Datum Earth and beyond, continues to evolve.

Now an elderly and cantankerous AI, Lobsang is living with Agnes in an exotic, far-distant world. He's determined to lead a normal life in New Springfield—they even adopt a child. But there are rumors, strange sightings in the sky. On this world, something isn't right. . . .

Millions of steps away—learning about a hidden family history and the father he never knew—Joshua receives an urgent summons from New Springfield.

Lobsang has come to understand that what has blighted his Earth is also a threat to all the worlds of the Long Earth. Countering this threat will require the combined efforts of humankind, machine, and the super-intelligent Next. And some must make the ultimate sacrifice. . . .


Click here to buy The Long Utopia from Amazon