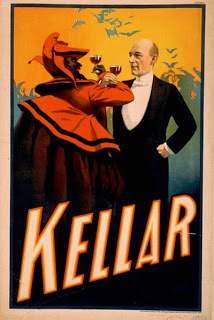 Sunday's are a great day for reading, whether it be the newspaper, the latest blog, a book or even a short story. The short fiction contest here on my blog is almost a year old and in a moment of synchronicity I've blended those two things to create a new feature called 'Sunday Story'.

Every Sunday I'll post a story for you all to enjoy, these will be picked from one of the winning entries from previous contests for you to discover (or re-discover!). I reserve the right to slip something new in there every now and again :-)

If you're looking for more short stories to read then I've set up a Facebook group just for that purpose, check it out here:

We start with the winner of the very first short fiction contest in June 2013, the month's image was an old poster shown above. The winning story was The Young Kellar by John Muligan, you can visit his website here:

The Young Kellar by John Mulligan

‘Yes, Mister Murphy, sir’. I would try not to annoy him, so as to avoid the stinging smack of his big hand on the side of my head. He always hit from behind, when you least expected it.

Old Squarehead hasn’t much to say now, has he? Not a lot; no, sir!
Posted by Michael Brookes at 10:11