Our Day of Passing Released Today

I am very pleased to announce that my short story 'This Empty Place' (first featured in 'An Odd Quartet') is featured in the newly released 'Our Day of Passing'. It's available free from Smashwords or by signing up to my newsletter. See the details below: 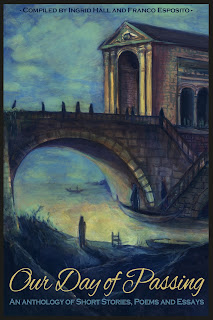 Do you have a macabre fascination with death and the afterlife?

If so, then this anthology is definitely for you. While some see the subject of death as too morbid to contemplate, others such as the skilled writers that have contributed to this anthology, view it as the perfect subject to stimulate creative thinking. Much like ‘love’ and ‘war’, the topic of death has the ability to draw out some of the most thought-provoking pieces ever to fill a blank sheet of paper.

Our Day of Passing is formed from an eclectic and diverse mix of short stories, poems, fictions and essays. Contributions have been assembled from over 30 talented writers across the globe, each with their own fascinating interpretation of an event that comes to us all…eventually.

Whether they resonate with your own circumstances or provide new wisdom or something to ponder over, each of these carefully selected pieces will undoubtedly unlock a series of emotions within you. The anthology has been written in such a way that it can either be devoured or dipped in and out of as your emotions dictate. Either way, you can expect to feel a greater sense of self and enlightenment from reading it.

Or sign up to my newsletter and you can receive a copy - some of my other books are available, but you can only pick one!

Posted by Michael Brookes at 11:57