Drabbles of Art - The Plague Piper by Zdzisław Beksiński 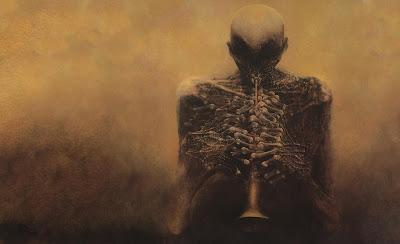 This is the second painting by Zdzisław Beksiński featured in the Drabbles of Art series and his image 'The Plague Piper' provided superb inspiration for today's drabble.

You can check out is other work on his official website here:

If you've not read the previous drabbles in the series then you will find them all here:

The Plague Piper by Zdzisław Beksiński

First came the dust and it quickly smothered the world. No-one knew where it came from. It blotted out the sun and scoured life from the earth. Many died as the air became too thick too breathe. The old and infirm were the first to die, and they were the lucky ones.

Now we survive underground, but some of us have to go above ground to scavenge. A few don’t return and we hear stories of a presence in the howling storms. It’s preceded by mournful pipes, alien tunes heralding a fate worse than living upon a sand blasted rock.
Posted by Michael Brookes at 13:13