This is a book that treads familiar ground. It's backwoods messiah whose power comes from a much darker and older god than the one he professes to bring to the people of Elton Township. Anyone familiar with native American mythology and Revelations will recognise what's going on. And that was the biggest flaw I had with the book, there wasn't any real surprises with it. Every major event was telegraphed or predictable.

It's saving grace is that it is very well told. The story is solid and moves in a blistering pace. The writing is good and while I might have known what was coming it kept me entertained enough to keep reading.

The book's strength is the characters, especially Lucky. He has a real talent for oratory and reading his speeches was a lot of fun. The insight into his thoughts was also interesting and well represented. One thing that did stand out was that every character was broken in some way which makes for a bleak view of the world. I'm not against that, but it does dilute the contrast with the ultimate evil, if it's a miserable existence anyway.

It's not for the faint hearted though. I'm not easily shocked, but the depravity in the story starts from eyebrow raising to something quite distasteful by the end. Overall I enjoyed reading the book, it's not particularly new, but tells a decent story well. 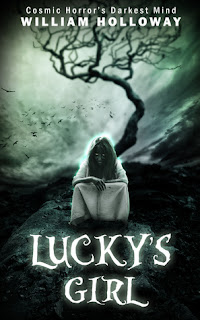 Something has awakened on Grove Island. Something that, even in sleep, has held Elton Township in its black embrace. Something old, wise and patient. Something that walked the ancient forests and howled beneath black skies.

Kenny McCord had a good life - his own slice of the American Dream. But all of that is over, so he is heading home to the small town he left behind so many years ago. However Kenny is not the only son that has returned to Elton Township. His childhood friend, and worst enemy, has come back to settle old scores and, quite literally, raise a little hell.