The horror genre has many books and short stories to boast of. From the earlier tales of writers like Lovecraft and Hodgson to the contemporary stories of writers like King and McCammon, you could read every day and never run out of scares. I've been picking books from the genre since I was a small child and I'm sure I will never be able to read all of those that are worth reading. That being said, I have a few favorites among those that I have read to share with you.

"The Exorcist" by William Peter Blatty

William Peter Blatty's most important work tops my list completely due to personal preference. I find the concept of possession terrifying. When you couple my weakness for the genre with the obscenely scary tale crafted by Blatty, you get me scurrying through my house at night flipping lights on before Captain Howdy can show up and ruin my life.

"The Stand" by Stephen King

"The Stand" makes the top because it takes into account the big picture during a viral apocalypse. What really freaked me out the first time I read it was King's use of the common cold to describe his Captain Trips virus. The idea that something could spread so fast and be as virtually untreatable as the common cold is creepy as hell. Ebola has nothing on this illness. It spreads fast and it kills like the Spanish flu.

This one is often cited as the first contemporary science fiction novel, and it is. However, it is also a disquieting horror novel that deals not only with the grotesque, but with morality and the deepest of human needs. It is hard to tell just who is the villain in this classic tale, a tricky moral dilemma that has been utilized by adapters of the tale ever since.

"The Monk" by Matthew Gregory Lewis

"The Monk" is a relentlessly hopeless tapestry of tragedy, religion and lust. Its characters are presented in ways that leave the reader believing they are truly pious and good. This misjudgment is quickly smashed wide open. Every time you think no more harm can be done, it gets worse. Written in 1796, it was a scandal, and even time has not dulled its sharp edge.

Nothing is quite like the back-story of a notorious literary villain. "Hannibal Rising" gives the evil cannibal Hannibal Lecter a both repulsive and sympathetic back-story that only makes the character that much more memorable. You would think this would be hard, it being the third book of a series, but Thomas Harris pulls it off.

"Interview with the Vampire" by Anne Rice

I would argue that "Interview with the Vampire" is a touch more romantic than it is horrific, but that does not take away from its appeal. Sure, there are those who would say this sort of vampire novel destroyed the much more frightening vampires of earlier fiction, but it is important to note that this is a different sort of fiction altogether. With the other stories in the series, Rice creates her own mythos surrounding vampires, leaving Dracula unsullied.

Yes, "Dracula" is long-winded. In fact, it may define the term, but it is an atmospheric masterpiece even if readers have to wade through it a bit. The characters are all flies stuck in a trap woven by a creature they could not imagine, until Jonathan Harker went to work for it and essentially invited it into their lives.

"The Island of Doctor Moreau" by H.G. Wells

Another science fiction novel that overlaps with horror is "The Island of Doctor Moreau." It only slightly beats out Wells' novel The "Time Machine" in terms of terror. The sick obsession of the titular doctor and the single-mindedness of the creatures he creates make for one of literature's most memorable tales.

"Scary Stories to Tell in the Dark" by Alvin Schwartz

Most of you probably remember "Scary Stories to Tell in the Dark" for its crazy illustrations by Stephen Gammell. They are very haunting, but the stories Schwartz wrote gave the book, and its sequels, substance. What I like most about these stories is the urban legend quality of them that particularly attracts kids. This is the penultimate horror short story novel for younger children. I read these stories for the first time when I was about nine and I'm still very nostalgic about them.

Michelle Barclay is a novelist and copywriter living on the South Shore in Massachusetts with her husband. She is the author of the short story "Rot," novel "Morrigan's Shadows" and its upcoming sequel "August's Gardens," to be released on August 18, 2015. Learn more at http://michellebarclay.net.

For emails about upcoming releases, contests and more, subscribe to Michelle Barclay's infrequent newsletter at http://michellebarclay.net/subscribe. 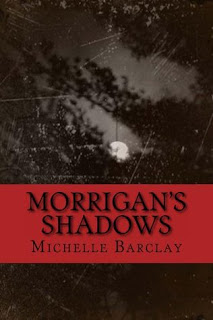 Morrigan's sleep is plagued with horrors. Afraid the vivid nightmares of her sleeping life will drive her insane, she sticks to a daily routine that comforts her until one day, she decides to change it. Through a series of traumas and encounters that claw at the seams of sanity, Morrigan finds herself confronting reality and it is not what she expected. Journey through Morrigan's nightmares as they seep into her waking world and threaten to destroy the only peace she has ever experienced.

Posted by Michael Brookes at 11:29