Clive Barker is my favourite contemporary horror writer and it was the Hellraiser film (one of my favourite horror films) that introduced me to his work. This is my third time reading the novella that inspired the movies and I enjoyed it as much this time as I did the first time.

There's so many aspects that elevate this into a classic read. First is the eloquence of the author's word craft. Just reading the language is a joy in itself. As a writer myself I can only marvel at the talent displayed and hope that I will one day match such skill. But I was a reader long before I became a writer and this remains a fantastic read.

The film based on this novella is excellent, mostly because of the cenobite characters, demons wrought from the flesh of those foolish enough to attract the attention of the order of the gash. The variety of the suffering visible in their forms works well on screen and the written word. The key difference here is that the book treats them as a collective rather than the simple imposing character of Pinhead as a leader.

The film does a decent job in visualising the horror in this tale, but the book does a far better job in describing the sensual nature of the cenobites. And that for me, beyond the quality of the writing, is what makes the story stand out. Normally the duality in horror is expressed as simple good versus evil, or the bestial against human, but here it's not so simple. The pain and pleasure is entwined, indivisable to coin a phrase.

It's a short read, but no less potent for that. The language is finely wrought and full of experssive dark imagination. A superb read and one that if you are a horror fan should be on your TBR list if you haven't already read it. 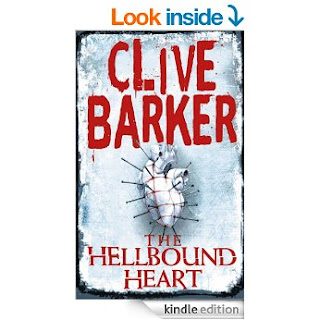 Clive Barker is widely acknowledged as the master of nerve-shattering horror. The Hellbound Heart is one of his best, one of the most dead-frightening stories you are likely to ever read, a story of the human heart and all the great terrors and ecstasies within.

At last he had solved the puzzle of Lemarchand's box. He was standing on the threshold of a world of heightened sensations. In moments the Cenobites - who had dedicated an eternity to the pursuit of sensuality - would be here. They would reveal dark secrets that would transform him forever.


Click here to buy The Hellbound Heart from Amazon (and it's a damn fine horror read!)

Posted by Michael Brookes at 11:24