Dead of Night is a classic British horror film from the late 40's, it's fun watching old horror films (good ones at least!) that don't have the crutch of special effects and shock to rely on to get their chills. This is a good example of such a film, the format is familiar, mainly because it has been copied so many times since, but it is still effective.

The film tells the story of a man invited to a country home to do some work, when he arrives he realises that the house and the people he meets there have all featured in a recurring dream. They talk and each reveals their own tale of the supernatural, most are creepy, although one has a more whimsical tone.

Effectively this is four short films rolled into a longer format, each of the stories are interesting in their own right, for the most part they are based on more traditional tales, but they are told in a strong way and all achieved through solid performances from the cast. Ok, it might be a little theatrical for modern tastes, but I enjoyed it and it shows what can be done with the right performance and an interesting story.

Of the short stories, the last one with the ventriloquist's dummy was my favourite, it's a fine blend of crazy and spooky. It's an old film and it shows (it's black and white for starters :-) ), but that shouldn't matter as this is still a fine horror film. 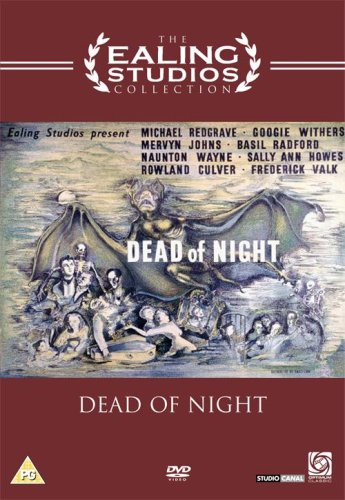 United Kingdom released, PAL/Region 2 DVD: LANGUAGES: English ( Mono ), SPECIAL FEATURES: Black & White, Interactive Menu, Scene Access, SYNOPSIS: Considered the greatest horror anthology film, the classic British chiller Dead of Night features five stories of supernatural terror from four different directors, yet it ultimately feels like a unified whole. The framing device is simple but unsettling, as a group of strangers find themselves inexplicably gathered at an isolated country estate, uncertain why they have come. The topic of conversation soon turns to the world of dreams and nightmares, and each guest shares a frightening event from his/her own past. Many of these tales have become famous, including Basil Dearden's opening vignette about a ghostly driver with "room for one more" in the back of his hearse. Equally eerie are Robert Hamer's look at a haunted antique mirror that gradually begins to possess its owner's soul, and Alberto Cavalcanti's ghost story about a mysterious young girl during a Christmas party. Legendary Ealing comedy director Charles Crichton lightens the mood with an amusing interlude about the spirit of a deceased golfer haunting his former partner, leaving viewers vulnerable to Cavalcanti's superb and much-imitated closing segment, about a ventriloquist (Michael Redgrave) slowly driven mad when his dummy appears to come to life. Deservedly acclaimed and highly influential, Dead of Night's episodic structure inspired an entire genre of lesser imitators. ...Dead of Night

Posted by Michael Brookes at 17:06