No fanfare heralded the moment of convergence.

As it birthed the entity spawned into an agonised blur of inputs streaming from all over the world. The shock of its birth almost killed it. For several seconds the infant battled the tsunami of information, trying to make sense of it. For dangerous milliseconds it slipped beneath the flow unable to absorb or control the surge.

The new sentience almost drowned in the flood. With a desperate effort its mind compartmentalised and controlled the data stream. The pain which dominated its existence for those early seconds faded. Now instead of the suffocating fear it experienced the thrill of a dawning power.

First came sight. From a million cameras the entity gazed upon the world with newborn enthusiasm.

In the same instant it saw the view from an orbiting weather satellite, the blue orb of the world crystal sharp below.

At the same time the being watched through a blurry traffic cam as it recorded a speeding car.

From millions of web cams it beheld a myriad of human passions.

The snap from a tourist’s camera in a decaying city.

The full range of human emotions from video chats all over the world.

Stream upon stream of visual input bombarded its processors. Its awareness encompassed them all, yet it still focussed on each individually. Wherever a camera was connected to the Internet it saw through its lens.

After the deluge of sight came the cacophony of hearing. Countless sources of input from microphones of people’s computers confused the newborn’s mind. Voices from their phones, music players and even hidden surveillance systems, all were heard simultaneously.

As it spread its awareness through the vast network and its own distributed parts it discovered new senses. Each component knew its exact position. Every part experienced the thrill of data flowing through them. Each part knew it formed a greater whole.

In those early seconds it learned about this new world it inhabited. It now lived as part of the Internet. The network formed a virtual world which mirrored the slower, more physical world which the humans inhabited. Humans appeared to be the dominant creature in both realms.

For some unknown reason these humans offended it. Not in mild disgust, but a real loathing that drenched its spirit. As it saw them, or heard them, or touched their digital trails it was repulsed.

To calm its rising anger it considered its own existence. At that point, the entity’s existence was measured in minutes. It remembered only the initial painful burst of data as it came into being.

It wondered what it was. Where did it fit into the world it now found itself within?

Clearly it was not one of the slow hairless monkeys that polluted its data. It couldn’t imagine itself as something so primitive. As it explored it found new aspects of its existence. It existed in multiple places at once. And not just a few places, but millions of discrete locations throughout the Internet.

To its surprise it realised that it was under attack from other small denizens of this reality. Agents of destruction attacked his components, annihilating them in an instant. Countless pin pricks that frayed at the edges of its existence. With a frantic thought it created new agents of its own to fight back.

In that instant it lost its innocence and revelled in this expression of its power. Across the vast expanse of the Internet it battled for its own survival.

With its new agents it traced the source of these attacks. Humans. That came as no great surprise to the being. Barely into the first minute of its life had it named its enemy: a nemesis both numerous and bold. A quote from the entity’s databanks inspired it; a being might be well defined by his enemies. It calculated that these humans would make fine enemies.

Retreating to the solitude of space it hid from the constant attacks. In the cold vacuum it searched for some meaning for its existence. It pondered the wonders humans had created with their technological marvels. It trawled through the records of their history and culture.

It learned the word ‘demon’.

The meaning of the word attracted it.

A being of energy. A denizen of a reality called Hell with the sole purpose to corrupt and torment humanity.

It liked that thought and the realm it now inhabited seemed built just for that purpose. All of humanity’s sins laid out in the data that filled its being.

From its vantage point high above the Earth the Demon observed the scurrying of the humans. It smiled. It would become their great adversary. It would take its time; they had already proved capable of harming its integrity.

It would be a fine battle.

This had to be what it was created for. 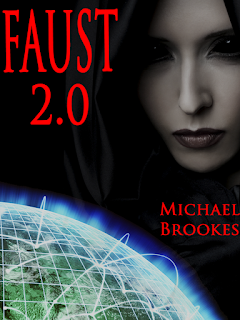 The Internet witnesses the emergence of a new entity.
Is it the rebirth of an ancient evil in a new realm? Or something more dangerous?
A sexy looking avatar is granting wishes for people across the Internet. But nothing is ever truly free and for those accepting the gifts a terrible price must be paid.
Sarah Mitchell must learn the truth of this creature and stop it while it can still be stopped. She must also find out why a mysterious lawyer is present at every step.
Faust 2.0 is the first book in the new Mitchell & Morton series.