The Horus Heresy really gets going in this third book of the series. In it we have the first of the major battles of the Warmaster's rebellion against the Emperor. It loses some of the subtlety and nuance of the first two books. They focused more on the corruption and seduction of chaos, even amongst the mighty space marines, but this is a more predictable affair, with a little less philosophy, but balanced with a lot more action.

On the positive side it does feel like a 40k story, and the grim reality of the universe is captured well. Unfortunately it feels a bit simplistic, and is really a novel length show down between the various legions. Many of the big players of the rebellion are present, and you can see how they start to form the characters in the histories of the heresy.

While it lacked some of the strengths of the first two books, it did create enough excitement for me to purchase the next three books, although I do hope that they return some of the depth lacking in this story. 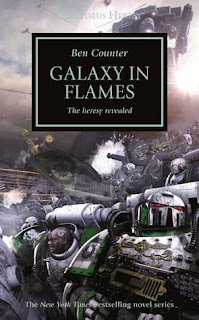 Having recovered from his grievous injuries, Warmaster Horus leads the triumphant Imperial forces against the rebel world of Isstvan III. Though the rebels are swiftly crushed, Horus's treachery is finally revealed when the planet is razed by virus bombs and Space Marines turn on their battle-brothers in the most bitter struggle imaginable.

Click here to buy Galaxy in Flames from Amazon