I rarely support book kickstarters as I usually prefer just buying the book once it's available, however this seemed like a fun idea so I backed it. And I'm glad I did. The concept is a good one to base an anthology of short stories around. The premise is what if Shakespeare rather than Lovecraft had discovered the Great Old Ones and in particular Cthulhu. So the book is based on stories written by the great bard, but all with a Lovecraftian bent.

I enjoyed reading the book, but it also one I was pleased to enjoy in hard copy rather than in Kindle form, and that's down to the format and the typesetting. The design is taken from play manuscripts of the time and adds a sense of visual aesthetic to the read. It also helps ground the stories it contains.

The stories themselves are a bit of a mixed bag. None of them were rubbish, but a few did stand out above the others. The story about Henry V really shined for me. It was also interesting to see how the different authors tackled the blend in stories. Some were more explicit than others, while some simply took inspiration and followed their own path. The Twitter sonnet at the end was a nice construct.

While the variance in quality can be expected in an anthology like this, it's strength also stems from that variety. The range of stories from Shakespeare is impressive, as is how they were handled. There's some lovely craft here.

So I liked this a lot, it was a fun concept, that delivered on its premise. Highly recommended. 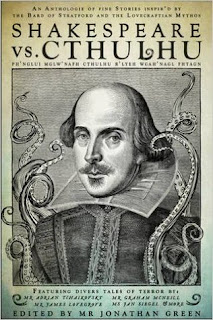 Shakespeare Vs Cthulhu An anthologie of fine stories inspir'd by the Bard of Stratford and the Lovecraftian Mythos Imagine if it had been William Shakespeare, England's greatest playwright, who had discovered the truth about the Great Old Ones and the cosmic entity we know as Cthulhu, rather than the American horror writer H P Lovecraft. Imagine if Stratford's favourite son had been the one to learn of the dangers of seeking after forbidden knowledge and of the war waged between the Elder Gods in the Outer Darkness, and had passed on that message, to those with eyes to see it, through his plays and poetry. Welcome to the world of Shakespearean Cthulhu! To mark the 400th anniversary of the death of William Shakespeare, Snowbooks proudly presents fifteen stories of eldritch horror that blend the Bard's most famous plays with Lovecraft's most terrifying creations. But before you dip into this cursed tome, be warned - that way madness lies...

Click here to buy Shakespeare vs Cthulhu from Amazon