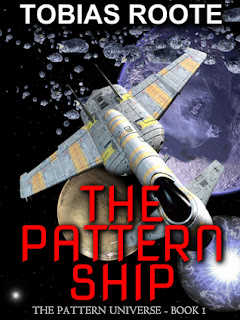 When particles of a metal skull plate forged from a meteorite end up in another universe in the middle of an alien war, it triggers an immediate and deadly response.

One man has to deal with a formidable human enemy who has the power to wreck the future. Only then can he prepare Earth’s defences for the coming alien war.

The Pattern Ship, Part 1 of the Pattern Universe, unrolls in a fast-moving compelling space action series that will grip your imagination right up to its dramatic conclusion.

Click here to buy The Pattern Ship from Amazon
Posted by Michael Brookes at 11:30