I loved the first book, the world it created was a rich and compelling one. The survivors clinging to life in the Moscow metro system in a post apocalyptic world made the first book such a good read. The story too elevated it into something special. Unfortunately this second book fails to reach those heights. It's not terrible by any means, but it lacks the sparkle of the first book.

The main issues are the story and the characters. They're both mundane in scope and in detail, lacking the grand vision of the previous book. It provided enough to keep me reading, but that was about it. There were a few thought provoking moments, some philosophical conjectures that gave me pause to consider. I do appreciate that in a book. Otherwise it just felt like a pale imitation of what had come before.

The setting provides it's saving grace. The variety and mix of how life operates in this harsh environment is well realised. The trials and tribulations are interesting in themselves, but don't really add much to what I'd already read. And that's the theme for this book I'm afraid. It has a few plus points, but if you've read Metro 2033 then you can probably give this a miss. 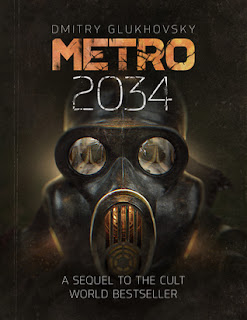 The long-awaited sequel to the cult bestseller Metro 2033, the second volume in the Metro trilogy, Metro 2034 continues the story of survival and struggle that unfolds in the mazes of the Moscow subway after WWIII. As the entire civilization was wiped out by atomic bombs and the surface of the planet is polluted with neclear fallout, the only place suitable for men to live are shelters and bunkers, the largest of which is the subway system of Moscow, aka the Metro.

The year is 2034. There's no hope for humans to return to the surface of Earth, to repopulate the forsaken cities, and to become once again the masters of the world they used to be. So they rebuild a strange and grotesque civilization in the tunnels and at the stations of the subway. Stations become city-states that wage trade and war on each other. A fragile equilibrium is established. And then all can be ruined in matter of days. A new horrible threat looms that can eradicate the remains of humanity and end our era. It would take three unlikely heroes to face this menace.

The basis of two bestselling computer games Metro 2033 and Metro Last Light, the Metro books have put Dmitry Glukhovsky in the vanguard of Russian speculative fiction. Metro 2034 tells a previously unknown part of the greater Metro saga that some only know from video games. Whether you're new to this series, are a fan of the first novel, or want to explore the world of Metro in depth, Metro 2034 is a perfect read for you! Featuring blistering action, vivid and tough characters, claustrophobic tension and dark satire the Metro books have become bestsellers across the world.

Click here to buy Metro 2034 from Amazon
Posted by Michael Brookes at 12:58